Just as we were getting used to a restructured Middle East and a completely failing Greece and Eurozone out comes the news that the UK is ready to support the USA in an attack on Iran and the Israeli Prime Minister, Benjamin Netanyahu, is also seeking cabinet support for a strike on Iran.

The Telegraph and Guardian articles are almost tired and bored in their approach to this particular topic. What’s another war ‘over there’? Seems to be the approach.

Whilst the Telegraph reports that Mr Netanyahu’s push ‘…for a military strike on Iran came after days of renewed public discussion among Israeli commentators about the possibility that the Jewish state would take unilateral military action against Iran.’ The Guardian says that the UK believes that the US is about to launch an attack on Iran and ‘In anticipation of a potential attack, British military planners are examining where best to deploy Royal Navy ships and submarines equipped with Tomahawk cruise missiles over the coming months as part of what would be an air and sea campaign.’

So it seems that we are being prepared for imminent military action against Iran.

Let’s all hope that this attack will be based on better intelligence that the ‘dodgy dossier’ that so stained Tony Blair and the Labour government of the time.

Let’s hope that the legal experts ask far more searching questions than they did last time. 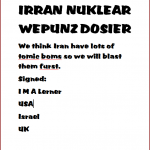 Let’s hope that the military chiefs ask for far more proof than they did the last time.

Especially as the intelligence agencies admitted that the West had too few spies (1) in the Middle and Far East to gather proper intelligence prior to the gulf wars.

The Guardian reports that it has been told that next week’s report from the International Atomic Energy Agency ‘…could be "a game changer" which will provide unprecedented details of the research and experiments being undertaken by the [Iranian] regime.’ Let’s hope that if this is so it will be checked properly.

A few decades ago we could (would) have trusted our politicians to tell the truth before committing us to yet another military escapade on the USA’s coat tails. We need more proof this time, much more. And the full picture needs to be given to parliament and the decision given to them to make. After all we can no longer trust the executive (government) to make such big decisions that could ultimately send many of our young people to their deaths after the last debacle.

I also wonder if anyone in power reads the Books of Daniel and Revelations any more.