As the Office for National Statistics releases its latest batch of unemployment figures, a new report published today reveals that far too many young people are ill informed about their career options.

According to the report, entitled Routes to Success, young people lack awareness of their options; including a misunderstanding of university fees, apprenticeships and school leaver programmes and that many young people are making poorly informed choices which may affect their future career options and the talent pipeline for many industries. The report calls on Government, educators and employers to take concrete steps to address these issues and suggest that they need to have a single coherent message on progression routes.

Official unemployment figures released last month by the Office for National Statistics show there was a slight decline in the number of people out of work. However, there are still too many young people, from school leavers to graduates, unemployed and searching for a job or training.

Liz Field, CEO of the Financial Skills Partnership, said, “Young people are making poorly informed choices, which may affect their future career options and the talent pipeline for many industries. The research shows that many young people know far too little about their potential career options and that employers, educators and the government could all do more to help. We need to equip young people with the knowledge and skills to take responsibility for their own career planning and progression, if they are to be the professionals of tomorrow, able to lead us out of recession and into growth and renewal.”

After the report is published on Wednesday, it will be officially launched at the Career Academies UK National Conference on 21 June.

James McCreary, CEO of Career Academies UK, said, “Having gained a snapshot of young people’s views, FSP and Career Academies UK will be pleased to discuss its implications with all interested organisations. Educators and advisors need to become more fully aware themselves of the full range of routes for young people, so as to give genuinely impartial advice and guidance. Employers need to communicate that work experience and internships offer genuine and meaningful opportunities to young people, as well as communicating, and ensuring, that apprenticeships and school leaver programmes provide potential for progression.”

Key findings from the report

â–  A greater number of students were seriously considering University as their preferred route than the number who strongly agreed that they knew a lot about it. This was particularly the case in London

â–  Young people believed they had a high level of awareness of apprenticeships, but further questioning revealed their knowledge was inaccurate and shallow

â–  Work experience was viewed as essential but outside of the formal Career Academies internship programme, their experience of placements was poor 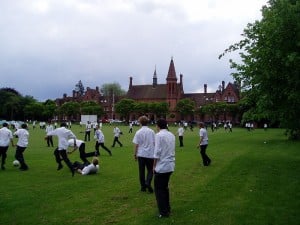 Image by Zephyris at en.wikipedia [CC-BY-2.5 (http://creativecommons.org/licenses/by/2.5)], from Wikimedia Commons