Bittersweet and sharp comedy drama following the exploits of 15 year old Oliver Tate (Roberts) as he plans to lose his virginity and win the heart of fellow classmate Jordana (Paige).

At home Oliver is faced with the emerging void between his parents and his mother’s increasing fascination with new age guru and neighbour Graham (Considine).

Ayoade has already carved out a reputation for himself as an orchestrator of off-kilter comedy via his work on Channel 4 shows The IT Crowd and Garth Marenghi’s Dark Place. Submarine marks an attempt to capture a wider audience with an adaptation of Swansea based writer John Dunthorne’s novel.

At first glance the film seems almost identical in atmosphere and editing to the quirky comedy drama style of Wes Anderson. There are touches of The Royal Tenebaums (2002) and Roberts’ geeky school outsider definitely shares a common thread with Jason Schwartzman’s lead character from Rushmore (1998). Even the credits are similar in style and presentation.

Except we are in South Wales and there’s something quite essentially British about this picture that captures a period of late seventies and early eighties suburbia that some might find nostalgic whilst others cringe worthy.

The scenes in the Tate household have many similarities with The Ice Storm (1997) except here the underlying drama is offset with some great black humour. There is also a scene stealing performance by Considine as the new age neighbour and wannabe spiritual guru Graham (complete with outrageous mullet), harbouring an ambition to seduce Oliver’s mother.

The humour throughout is very slick and varied (crude in the school playground and mildly indifferent in the Tate household) with Oliver’s vengeful late night drunken commando raid on Graham’s house one of the film’s highlights. 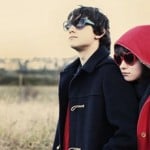 Roberts portrays Oliver as a teenager with a clockwork mind that never stops churning out irrelevant thoughts and ideas, sometimes slightly dark but never gooey.

Important as it’s through Oliver’s eyes and narration that events in the movie unfold.

Likewise Paige gives her Jardana character a slightly icy, deviant quality and is definitely no girl next door.

After all, these are teenagers and meant to be slightly delinquent and where moments of heartfelt drama do emerge (such as Jordana’s pending family tragedy) then credit must be given to Ayoade and the cast for never allowing the film to revert to sickly teenage or kitchen sink melodrama.

Elsewhere the mood swings and experiences of adolescence are enhanced by some intimate musical moments courtesy of Artic Monkeys frontman Alex Turner.

Throw in moments of surreal effects care of Oliver’s over worked imagination combined with scenes of teenagers escaping everyday life into the derelict surroundings of disused industry and you have one of the best films of the year so far.