British Scientists have announced growing "Super” Broccoli which they claim can help avoid cancer and heart disease. Is this newfangled pharma-vegetable really all that, or just another gimmick to sell more product?

“Super” broccoli have been engineered to have up to three times more glucoraphanin which researchers claim reduces cholesterol, apparently breaking down fat in the body and helping to fight cancer. All that, in one helping? It sounds too good to be true!

Chris Masterjohn, in an article about Cruciferous vegetables such as broccoli, explains potentially harmful effects of feeding people concentrated amounts of glucoraphanin, the dose of which will be impossible to regulate. His article suggests the relationship between cancer and broccoli is far more complex and doubtful than the broccoli marketing departments appear to suggest.

Glocoraphanin is a member of a class of substances called goitrogens. So called because they were once blamed as a primary cause of goiter. This is a thyroid disease which results in major swelling of the neck. Goitrogens can harm the thyroid by increasing the body’s need for iodine, depleting its reserves, potentially causing other thyroid issues. Anybody taking the super broccoli should therefore consider taking additional iodine supplements. However, not being classed as a drug, this product will lack such warnings on the label, which could cause particular problems for those already suffering from thyroid issues. Lactating mothers women should be concerned because goitrogens can limit the body’s ability to transfer iodine into the baby’s milk.

But is that potential risk outweighed by other claimed benefits? Glycoraphanin breaks down into a chemical which helps an important detoxification enzyme neutralize carcinogens and other toxins and transport them out of the body. This can indeed include oxidised cholesterol or trans-fats. So far so good.

However, glucoraphanin also breaks down into a number of other potentially toxic products, proving that good intentions can often have negative unintended consequences. Chris Masterjohn cites an Italian study where rats were fed purified glucoraphanin to rats. It found limited evidence of detoxification yet stimulation of a liver enzyme which boosted the level of free radicals by between 10 and 22 fold. The researcher’s conclusion was that it would be dangerous to feed concentrated doses of glucoraphanin and that people should instead simply eat a diet rich in a wide range of fruit and veg (1). 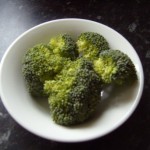 This glocuraphanin derivative is also known to kill cancer cells by blocking their ability to multiply, potentially by preventing the growth of blood vessels which feed the tumor, but Chris again casts doubt. He cites a study from the University of Illinois which suggests that glocoraphanin derivatives causes chromosome damage and not only to cancer cells. The researchers state that it “may pose a toxicity issue for other tissues undergoing normal growth and development” suggesting that further research be done to determine toxicity. (2)

Unfortunately the story doesn’t finish there. Chris also reveals that inole glycosinolates break down into chemicals which inhibit the coenzyme ATP which all cells use to transport energy, resulting in oxidative stress, depletion of glutathione and a breakdown in cellular reproduction. The chemicals which do this have been shown to be anti-viral and anti-bacterial but have a mixed and potentially unpredictable impact on cancer, inhibiting some cancers and promoting others, depending on context.

Fascinatingly, researchers have argued away the toxicity arguments, suggesting that these will stimulate the body’s immune system. But for me, this is similar to the flu vaccine argument. I prefer to instead to get lots of vitamin D and other well trodden paths to immunity, leaving unproven, newfangled foods on the doorstep, particularly when they appear to be elevated by a well targeted PR campaign. More sinister though is the concept of delivering pharmaceuticals through the food supply, where compatibility and dose cannot be measured and side effects cannot be measured.

Only time will tell if this new “super food” has any impact on cancer rates. I also fear that the present epidemic in thyroid disease could be made worse and that breast fed babies could suffer iodine deficiency if their mothers eat too much of this “super broccoli”.

In conclusion, I would choose instead to take the advice of the Italian researchers, to seek out a balanced diet with a wide range of different vegetables and leave the experimentation to others.

Philip Ridley is the London Chapter Leader of the Weston A. Price Foundation. (www.westonaprice.org/london)

Back to school: 11 fascinating kid’s dental health facts you really need to know