A ComRes poll conducted for the Coalition For marriage (C4M) puts UKIP support at 22%, compared to 31% for the conservatives, 24% for Labour and just 12% for the LibDems.

The poll was conducted between the 24th and 28th April and covered how people voted in the 2010 general Election, how likely people were to vote on the 2nd of May as well as who they would vote for and whether the coalition's recent plan to legalise same sex marriage had affected their voting intentions.

Since then support for the Tories has slipped, which is understandable in a mid-term local election.

The big story really though is that although Labour has gained ground it has managed to only increase support from 22% in 2010 to 24% now. That's almost treading water in political terms. At this point in the electoral cycle with the economy in such a dire position one would expect Labour to be romping home.

Then with the LibDems also falling back from 22% in 2010 to 12% today you come to the obvious conclusion that UKIP is making significant headway in the political arena at the expense of support for the other three main parties. 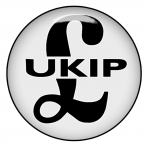 In the 2010 General Election the voter turn out was 65.1% and this ComRes poll found that 56% of those asked would be 'absolutely certain' to vote, so that would be a minimum turn out. In the 2009 local elections the turn out was about 39-40%.

When it came to the question of how the coalition's plans on the legalisation of same sex marriage would affect voter intentions the message was quite surprising. No matter if it was Conservative, Labour, LibDem or UKIP it seems that the same sex marriage plan made voters less likely to vote for those parties, although the figures are relatively small. The vast majority of those asked said that it made no difference to how they would vote.

Looking at the figures in more detail you find that:

The don't know made up the rest.

UKIP leader Nigel Farage is campaigning in the historic fenland market town of Ramsey, Cambridgeshire today arriving at about 12:30 to meet the public and visit local independent shop-keepers.

Negative Interest Rates in the Eurozone Could Boost UK Exports