• Consumer confidence at highest levels since before the economic downturn

• Marked increase in employees experiencing pay rises, promotions, or bonuses over past year

• 32% have seen business hire new workers due to growth

• For first time since YouGov and Cebr started measuring it, majority of consumers  think  economy will grow or boom over the next year

The YouGov/Cebr Consumer Confidence Index is at its highest level since August 2007 – before the recession – as house prices continue to increase and employees start to feel the benefits of the economic upturn.

With today’s GDP figures expected to show that improving levels of business investment are starting to boost growth, YouGov and Cebr’s data suggest that workers are already beginning to feel the benefits. Since the start of 2014 there has been a noticeable increase in the number of employees experiencing pay rises, promotions, and bonuses and almost a third of workers say their employers have hired additional staff over the past 12 months because of growth.

However, while the improvement in the workplace suggests that consumer confidence is increasingly built on more solid foundations, the main force behind the increase continues to be rising house values.

James McCoy, Research Director at YouGov: ‘Consumer confidence grew at a sluggish rate during Q1 2014, but April’s figures suggest that confidence is set to make great strides over the summer. After months of economic optimism increasing hand-in-hand with property prices, at last it seems as if the benefits of the recovery have started to reach employees, pointing to a broader, deeper recovery taking hold.

‘We are now back to where we were before the recession. However, before we get too carried away, it is important to note that consumer confidence was not necessarily setting the world alight in the run-up to the crash. While household financial situations are getting better, the proportion of people who think they will be worse off this time next year is higher than those who think they will be better off.’

Charles Davis, Director at the Centre for Economics and Business Research: ‘Today’s closely watched GDP figures should show that the economy has grown steadily again, with business investment finally increasing after six or seven anaemic years. But it’s not only the case that businesses are spending again – it is also that workers have started to notice. While house prices are still the major driver of the surge in consumer confidence, employee benefits are also starting to improve. This is likely to continue throughout the rest of the year, helping contribute to growth that we expect to be in the region of 3%.’

The YouGov/Cebr Consumer Confidence Index has risen at its sharpest rate since last October and now stands at 112.9 – its highest level since August 2007. The +1.2 point growth in April follows marginal growth over the course of Q1 2014 when the Index increased by just +1.5 points. 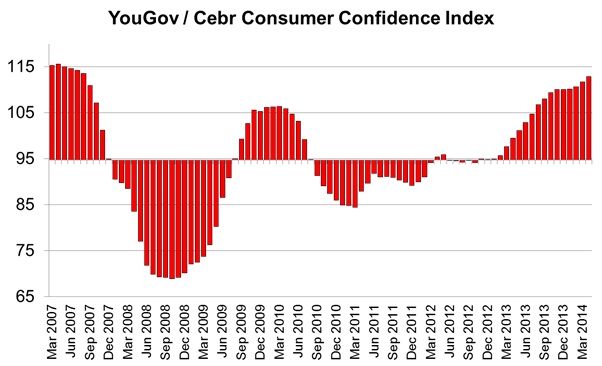 This growth in confidence comes as workers finally start to feel the benefits of the recovery. Since the start of 2013, there has been a noticeable improvement in the proportion of employees getting pay rises, promotions or bonuses. There has been a particular upturn since the start of this year, with 44% of employees now saying that they have received increased benefits over the previous 12 months. In addition, 32% of workers say their place of work has hired new employees over the past 12 months because of growth. 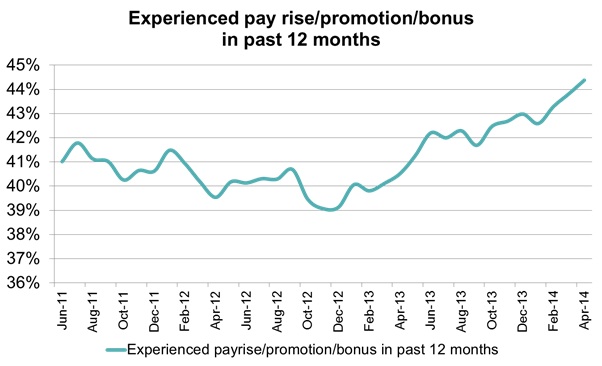 Despite the improvement for employees, the main driver of consumer confidence continues to be the housing market. Some 39% of home owners believe that their house prices have risen over the past month while just 5% have felt them fall. It is a turn-around from April 2013 when equal numbers (12%) thought their property’s price had improved and decreased. 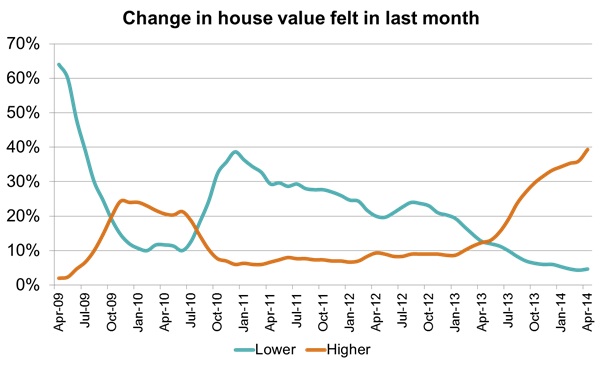 For the first time since YouGov started asking consumers whether they think the economy will improve or shrink (in the form of recession, depression, growth or boom), the majority now think it is growing. Compared to April 2013, the proportion of those thinking the economy will experience growth or boom has improved from 31% to 51% while the proportion of those thinking it will go into recession or depression has fallen from 69% to 49%. 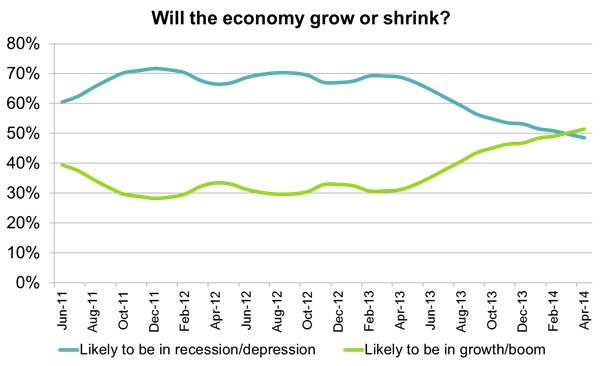 Most affordable London boroughs revealed for the Class of 2017 graduates