The government will be able to breathe a tad easier and allow itself a pat on the back today as the latest public sector finance figures show a surplus of £7.75 billion, well above the predicted £6.3 billion.

It is also the best set of figures (excluding financial interventions – i.e. bank bail-outs) for some four years and well ahead of last year’s £5.2 billion surplus.

January is however always seen as a juicy month for the Treasury with a good tax take.

This puts the Treasury on target to come in under the Office for Budget Responsibility’s projected annual net borrowing forecast of £127 billion, maybe by as much as £10 billion as Vicky Redwood of Capital Economics told Sky News [1].

Together with today’s news that a Greek deal has been cobbled together (at least maybe for a year or so) this might give the Chancellor some breathing space with a budget in the offing and the government will of course claim that their austerity plan is at the heart of such good numbers.

But before we all go off thinking that this is the end of our problems we should remember that we, as a country, have borrowed an extra £93.5 billion this year that just gets added to the overall national debt of about £1 trillion. This January’s figures are just a very small adjustment in the right direction when looking at the big picture.

This graph based on ONS figures shows the way our net debt has just kept on increasing over the last couple of years and how much ground we are going to have to re-gain. 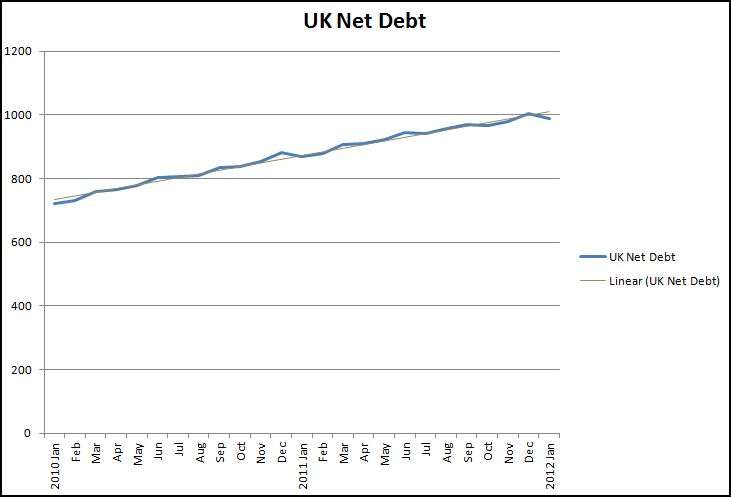 And this next graph shows that growing debt as a growing percentage of GDP. To reverse this we either need more growth or less debt. And the higher this gets the higher our borrowing costs are unless we have really favourable interest rates, say by keeping our Triple A (AAA) status. 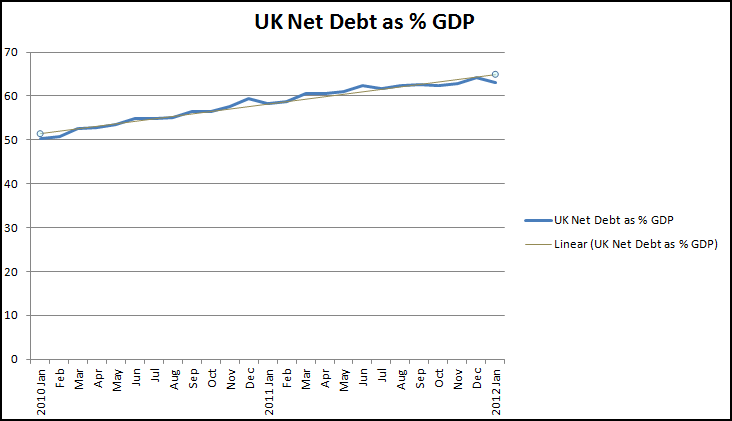 Finding a Better Deal on Your Energy Just Got Easier