Svengali is the film that has burst onto the silver screen exciting both the public and film makers alike, but does it live up to the hype?

It all started out as a an online cult phenomenon penned by Welsh actor and writer, Jonny Owen, whose talent soon attracted backers who could see the potential in turning Svengali into a major motion picture through Root Films.

So what's all the fuss about?

Well, Svengali is directed by John Hardwick and has an all-star cast that includes the likes of real life Svengali, Alan McGee, Martin Freeman, BAFTA award winning actress, Vicky McClure, Roger Evans, the late and great Brian Hibbard and of course Johnny Owen as the lead character and writer.

In other words this film has Rock 'n Roll written throughout it's DNA and also boasts probably one of the finest film soundtracks for many a year complimenting perfectly the story of an unassuming lad from the South Wales Valleys heading down to London in the footsteps of the great musical Svengalis. Armed with sheer determination he heads to the capital to manage a little known and unsigned band, The Premature Congratulations ('The Prems' for short) that he had discovered on the internet.

A charming premise for a film but going back to my original question does it live up to the hype and does it work as piece of cinema?

In a word, no…it renders my question irrelevant because Svengali blows expectations out of the water and for once the hype does not live up to this incredible piece of British film making.

Right from the off this film takes you by the hand and draws you into Dixie's (Jonny Owen's character) world and there are also a few brief moments when very subtle undertones of an almost warmer version of Quadrophenia break through.

The casting is fantastically fresh and it's this combination of freshness in cast and unashamed warmth that makes for a most engaging movie. 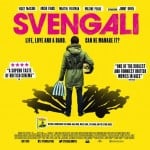 John Hardwick's direction is precise, concise and to the point in framing what is, when considering the cast, a very unpretentious film.

Martin Freeman is his usual excellent self (he didn't land the lead role in The Hobbit for no reason) but this film is Jonny Owen's moment.

You will laugh and cry with Dixie on his circumnavigation of the cut throat world of the music business, not just because of the excellent scripting but also through Owen's ability to add unexpected layers of depth to Dixie's character.

The chemistry is more than evident between Owen and McClure, who are a couple in real life, however the scenes between Brian Hibbard (who plays Dixie's father) and Owen are some of the most touching I have seen in a long time.

Brian, who's performance is nothing short of triumphant, sadly passed away before this film was released and without any doubt he would have been delighted with the end result and aside from everything else Svengali stands as a fitting tribute to one of Wales's most beloved sons.

There is even a case for Alan McGee taking up acting full time should he tire of the music industry.

As for negative points there are none that stand out.

I can see how some people might not 'get it' by wrongfully dismissing it as a 'feelgood' film and to be honest this is their loss.

Yes, Svengali is overtly emotionally evocative but this intentionality of feeling is Svengali's strength and to be celebrated, it is not trying to be anything other than what it is, a quirky yet cool film brought together with passion in a centralised plot that holds a strong narrative and only deviates from that plot when it wants to and not because 'it should'.

You don't watch Svengali in formulaic plot recognition, you enjoy the process of feeling it through relating to the characterisation.

Personally I think there has been an over-saturation of films that try to be clever for the sake of being clever and just end up being sterile and that's why Svengali is a breath of fresh air with it's straddling of mood and brooding aspiration, don't get me wrong there is a place for sterility but not outside a hospital ward.

This is not a film that is trying to be anything and simply revels in what it is.

If you are looking for a dark, ultra-realistic gritty documentary/mockumentary reflecting the struggles of bands in the 21st century to get signed then Svengali is not the film for you but, if you are after a highly entertaining film with soul leaving you with a warm glow that doesn't take itself too seriously, then you are in for a real treat.

The irony is, Svengali is actually a very clever film in scripting that pretends it isn't by focusing on the feel of the subject matter as opposed to trying to batter you into approval with highly convoluted lengthy passages of dialogue.

No you are not going to laugh hysterically out loud, but you were never meant to. Instead you will be rooting for the lead character and miss him when the end credits arrive.

I was trying to find a the right word to sum up Svengali and the only one that fits is 'mesmerising' and I will be buying the DVD (Blu Ray) because I think it will sit most respectably on my DVD shelf next to Tommy, The Police Live and Pink Floyd's The Wall, whilst the soundtrack will fit nicely next to Pulp Fiction and Trainspotting.

Svengali is hereby awarded a rating of 10/10.

Brian Hibbard will be gazing down on Jonny Owen and crew tonight with immense pride telling them to follow their dreams, let's hope they do.