Last week was a once in a lifetime experience. It was a catastrophic event indeed for many financial institutions, traders, investors and also for many ordinary loan holders.

But the main story did not start with the Swiss National Bank eliminating the 1.20 EURCHF floor, but with the European Court of Justice ‘s green light for the ECB’s bond buying program.

The German Central Bank as well as the German Chancellor have been objecting the ECB’s Outright Monetary Transactions initiative.

But on Wednesday the 14th the Outright Monetary Transactions program that the European Central Bank president pushed through in 2012 won the conditional backing of Advocate General Pedro Cruz Villalon of the EU Court of Justice in Luxembourg.

ECB having the go ahead, now stood the chance of pushing their highly anticipated Quantitative Easing (QE) program, which aims to pump up as much as 1 trillion Euro into the European economy in an attempt to rescue the troubled region.  The ECB president Mario Draghi expected to announce his QE program on the 22nd of January, which meant that the Euro as a common European currency could lose more value as the supply and demand equation balance would be broken with such a massive amount of capital entering into the economy. Hence, the Swiss National Bank would have had to print more and more Swiss francs in an attempt to buy more Euros and other foreign currencies to keep up with their 1.20 floor commitments against the Euro. 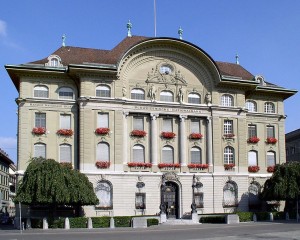 ECB’s QE program would be just the beginning of the SNB problems as the FED is also expected to announce a rate hike by April 2015. ECB on the ease, the FED on tightening would mean more and more monetary divergence between Europe and the US, which would damage the economy of the export oriented Switzerland.

With imbalance in their balance sheets and too much foreign reserves risk carried onwards the Swiss central bank basically could not bear the risk anymore and surrendered to the market on Thursday the 15th after their emergency meeting. This historic event quoted as a “black swan event” by many analysists once again proved that no one can beat the market; not even the most secure and established central bank of the world.

The Swiss may now be free of too much foreign exchange reserve risks, however they will now have to deal with something more difficult, bringing their exports to the previous levels and getting out of deflation.

Now this week, every trader must watch out for the ECB meeting on the 22nd of January as it is likely that Mr. Draghi will proceed with his bond buying program. Depending on the exact structure of the ECB press conference and the press release EUR/USD could drop to 1.00 level or may the expectations be turned down we may also expect a corrective wave from the pair.

And finally we will have the Greek elections on Sunday the 25th, if the left party Syriza wins, which it most likely will, the Greek exit will be on the front pages once again, which would be yet another massive negative news event for the Euro.

So, buckle up traders. It is time to focus on strong risk management.

What will it take to end Russia's currency crisis?