'The reason I do it is because first and foremost I am Syrian and I can’t stand to see my people suffer.’ Hamza, Syrian Arab Red Crescent volunteer, December 2011

Photographs by an award winning Syrian photographer that reveal the impact of conflict on humanitarian volunteers in the country, are being unveiled at IWM North, part of Imperial War Museums, in Manchester.

The powerful images explore the experiences of Syrian civilians and humanitarian volunteers who place their lives on the line, almost three years since the outbreak of conflict in March 2011.

The free display features the comments of local volunteers for the Syrian Arab Red Crescent (SARC), reflecting on their motivations to become a volunteer and the risks they take as they stay in Syria to respond to the current conflict and humanitarian crisis.

The British Red Cross and SARC are part of the International Red Cross and Red Crescent Movement, the world's largest independent humanitarian network.

Malla is currently working in and around Syria for the International Federation of the Red Cross. This free display contains his most recent work. Malla has previously photographed many humanitarian crises. He has exhibited in Syria, Italy, Madrid, Paris, London, Geneva, Sydney, China, Germany and Scotland and won six international awards during his career.

Across the country, thousands of SARC volunteers continue to provide essential assistance to those affected by the crisis.

"My photos show the tragedy of the conflict with a message of hope – showing the hard job that the Red Cross and the Red Crescent volunteers are doing, always helping everybody in respect of our principle of neutrality. This is the message that I started to carry around the world, to let everybody know and see the bravery of the Syrian Arab Red Crescent volunteers. I feel this is my duty to honour my friends who sacrificed their life."

"From images of aid distributions to the evacuation of 2,000 people from a besieged town in October 2013, Malla’s images portray the role, dedication and bravery of these volunteers in Syria today." 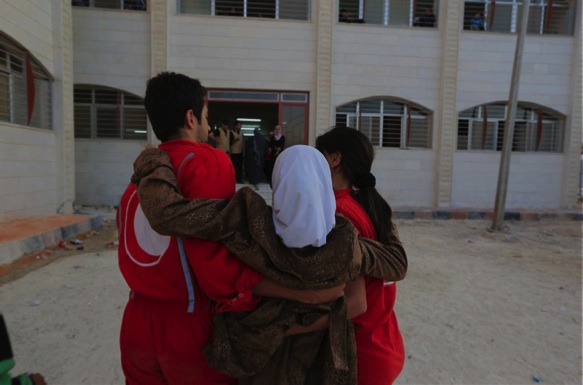 Evacuation of 2,000 women, children and elderly men from Moaddamiyah, a besieged town in rural Damascus, 13 October 2013 – by Ibrahim Malla. Syria: Humanity in Conflict at IWM North. 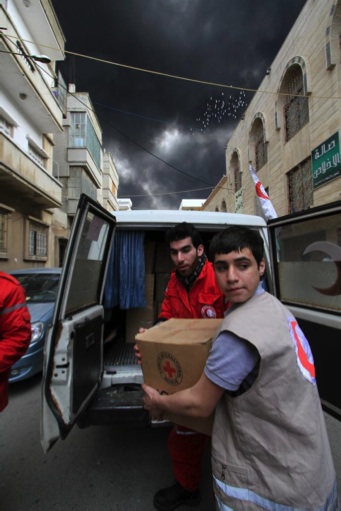 Humanitarian aid delivery in Homs- Baba Amr, central Syria. In the background the sky is full of smoke from nearby explosions, 15 February 2012 – by Ibrahim Malla. Syria: Humanity in Conflict at IWM North. 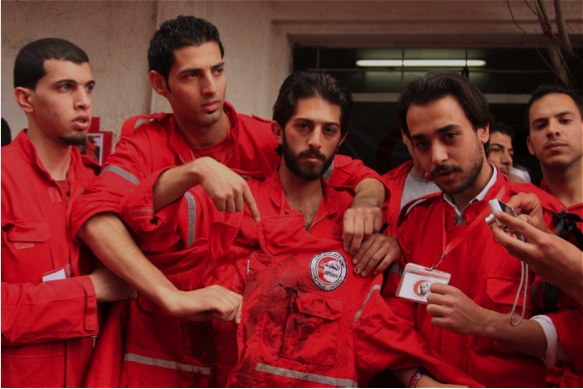 SARC volunteers hold up the jacket of Mohammad Al-Khadra, a SARC volunteer who died on the 24 April 2013, while on duty in an ambulance on an emergency call. 30 April 2012 – by Ibrahim Malla. Syria: Humanity in Conflict at IWM North.