Tara Palmer-Tomkinson's debut single '5 Seconds' is a wonderful piece of work and will do much to put her critics to shame.

The song is like a breath of fresh air to review because it defies all preconceptions of TPT.

5 SecondsÂ is a heartfelt offering which not only shows off Tara's superb voice andÂ song-writingÂ skills, but also pays attention to detail in performance, arrangement and production. (See video below.)

A quick all round synopsis of the song would be as follows.

Tara's song-writing style isÂ reminiscent of Aimee Mann and Gwyneth Herbert, yet vocally connects with the song in the same way asÂ Marianne FaithfullÂ does, with a touch of Nico in lyrical articulation.

The piano and celloÂ arrangement with a looseÂ sporadic combination of sequenced drums and building intoÂ acoustic drums (and bass) sounds also points towards an Aimiee Mannesque production but theÂ subsequentÂ build in strings does not conflict or ride roughshod over the piano basis or the beautiful vocal.

TPT's vocal has the right amount of character to hold aÂ narrativeÂ and then is lifted by the timbre of her voice.

The song is of Â is not afraid to use a quirky lyrical choice or imagination inÂ conveying the lyricsÂ and that demonstrates boldness and I personally am very much looking forward to hearing her album Flawed from which 5 Seconds is taken.

Flawed will be available toÂ downloadÂ from iTunes on the 21st of September. 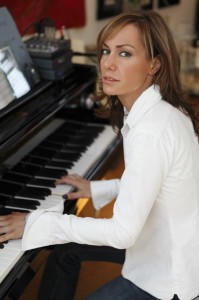 Edinburgh Fringe Festival – Andrew Lawrence Is Coming To Get You