Alexander Calder, Barbara Hepworth and Jackson Pollock are among the highlights of the exhibition programme for 2015 at Tate

Tate announced today highlights of its 2015 exhibition programme. They include retrospectives of two of the most significant figures in international modern sculpture – Alexander Calder and Barbara Hepworth – and major exhibitions of the painters Frank Auerbach, Marlene Dumas and Jackson Pollock.

At Tate Modern in the autumn, Alexander Calder: Performing Sculpture is the artist’s first major retrospective in the UK. Calder (1898-1976) is known for his invention of the mobile and, as a pioneer of kinetic sculpture, played an essential role in reshaping the history of modernism.  Earlier in the autumn, The World Goes Pop will tell new and different stories about Pop art from the 1960s and 1970s. It will reveal how one of the world’s most accessible art movements was often a subversive international language for criticism and public protest.

The first half of 2015 at Tate Modern features three major retrospectives by prominent modern and contemporary painters. Sonia Delaunay (1885 – 1979) celebrated the modern world of movement, technology and urban life as a significant figure of the Parisian avant-garde from the 1920s. American minimalist painter Agnes Martin (1912-2004) came to prominence in the 1960s with her subtle, evocative canvases marked out in pencil grids and pale colour washes. And Marlene Dumas’s (b.1953) paintings reflect contemporary anxieties about life and death, gender and sexuality, and the influence of mass media and celebrity. 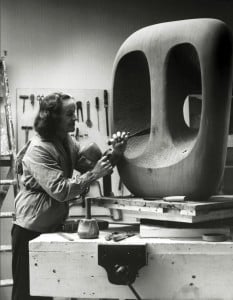 At Tate Britain the first retrospective in London since 1968 of the work of Barbara Hepworth (1903-75) opens in the summer. One of the most successful sculptors in the world during the 1950s and 1960s, it will emphasise Hepworth’s now often overlooked prominence and significance in the international art world.  Frank Auerbach (b.1931) has made some of the most resonant and inventive paintings of recent times, of people and of the urban landscapes near his studio in Mornington Crescent. Tate Britain is working closely with the artist on an autumn exhibition of works from the 1950s to the present day. From the autumn, the group exhibition Art and Empire will present art of the last three hundred years, including contemporary works, associated with the British Empire.

Tate Liverpool’s summer exhibition, Jackson Pollock: Blind Spots, will bring together the late work of one of the most influential artists of the twentieth century. The show will include the paintings made between 1950 and 1953 that are often referred to as the ‘Black Pourings’.  During 2015 the gallery will also stage solo exhibitions by Geta Bratescu, Leonora Carrington, György Kepes, Glenn Ligon and Cathy Wilkes.

Tate St Ives will mark the centenary year of Terry Frost’s birth, with a solo exhibition opening at the same time as one of the work of contemporary artist Jessica Warboys. The exhibitions will look at their shared use of symbolism, their vocabulary of forms and their playful approach to landscape.

Edinburgh Fringe Festival – Matt Rudge: We Could Be Heroes

The Modern Lens: International Photography and the Tate collection