Tate and Bloomberg Philanthropies today announced a three year renewal and expansion of their ground-breaking Bloomberg Connects digital engagement initiative. Launching with the official unveiling of an interactive Timeline of Modern Art, designed by Oscar-winning visual effects studio Framestore, the renewed partnership will see the launch of a series of dynamic new digital interpretation tools and materials including a Tate App and on-site interpretation spaces, all aimed at further extending the ways in which Tate's millions of visitors engage with art.

Following two years of development by Framestore, who worked on such feature films as Gravity and Guardians of the Galaxy, the Timeline of Modern Art is a 6.5-metre-long digital touchscreen offering a unique way for visitors to explore the Tate Collection. Presenting an ever-changing display of over 3500 works of art by 750 artists, many of which are connected around a selection of 70 key movements in international art history, the timeline allows users to read more about key movements, see connections between artists across time, and wheel through digital images of iconic works of art. The timeline is made up of 60 rear projection micro-tiles surrounded by an infrared interactivity kit, creating a touch sensitive screen across which a cascade of words and images can be explored in an intuitive and fluid way. Content will continue to grow with Tate’s collection in the coming years, as new artists and movements are added. 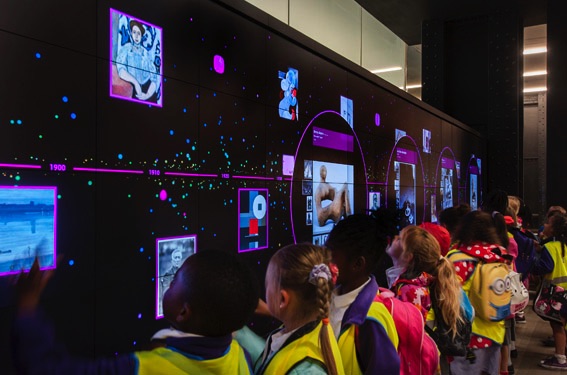 Work is also underway to create the next generation of tools for visitors to the new Tate Modern, which will open to the public in June 2016. Bloomberg Philanthropies’ support will enable dedicated spaces to be created within the collection displays in the new and existing galleries. These hubs will allow visitors to interact, understand and debate ideas raised by the art on display. A new Tate App, a first for the gallery, will assist visitors in their journey around the new Tate Modern whilst giving users the opportunity to engage with individual works and access in-depth information on artists and movements from across Tate Modern, Tate Britain, Tate Liverpool and Tate St Ives.

Bloomberg has supported Tate Modern in the development of cutting edge digital interpretation tools since the gallery opened in 2000. Creating a range of innovative tools and materials to enhance and inspire an interactive experience of art for growing audiences, the partnership has allowed Tate to set a global industry standard for interpretation in the arts. Tate Modern was the first gallery to offer hand-held digital tours, which went on to win a BAFTA for technical innovation and a Museum and Heritage Award for Excellence. The Bloomberg Connects initiative, launched at Tate Modern in September 2013, saw the introduction of the Digital Drawing Bar, where visitors of all ages have since created over 150,000 drawings – an average of almost 250 every day – inspired by works in Tate’s collection; and Tate Shots, a weekly series of short films produced by Tate which have had over 6.5 million views, and ensure that access to Tate's wealth of artistic content is available not just to those in London, but to people all around the globe.

Bloomberg Connects has so far reached approximately 15 million people and now acts as the overarching identity for all of Bloomberg Philanthropies’ digital arts engagement and interpretation projects worldwide, including projects at the Metropolitan Museum of Art in New York and Singapore’s Gardens by the Bay.

“Ever since Tate Modern opened 15 years ago, we have worked with Bloomberg to help our visitors understand, enjoy and engage with modern and contemporary art. The new partnership with Bloomberg will build on this success to meet the growing demand for participation and digital interaction by offering visitors of all ages new ways to explore the collection.”

“Tate Modern is one of the world's most dynamic museums, and we're glad to help expand public access to its collections and give audiences new and exciting ways to experience all the museum has to offer. These innovative new digital tools will make visits to Tate more rewarding than ever.”

“The brief for the timeline was an exciting prospect for the team at Framestore. We knew that the installation would have to be both visually captivating and innately usable to fit the needs of the ever-expanding Tate Modern. It has been a pleasure to use innovative technology to open the collection to visitors in a completely new way.”

Don't Be Afraid of the Dark – A Guillermo del Terro presentation