EY has twenty years’ experience of supporting and investing in UK arts and culture, but this new partnership – its largest with a single arts organisation in Britain – marks a major step-up in the firm’s activity, reflecting EY’s new global strategy and its international reach.

The EY Tate partnership will help Tate to realise its ambitious arts programme across Tate Modern and Tate Britain, with EY’s support being extended through corporate memberships at Tate Liverpool, Tate St Ives and at many of the Plus Tate partners around the country, from Bristol to Cambridge, Manchester and Birmingham.

EY’s commitment will also help Tate realise three major autumn exhibitions over the next three years. Entitled The EY Exhibition, they will start this October with Paul Klee: Making Visible at Tate Modern. This will be the UK’s first large-scale Klee exhibition for over a decade, bringing together around 100 works by this playful and radical master of European Modernism.

Tate and EY play an important part in the economic and working life of the UK. Annually Tate reaches an audience of over 21 million people through its activities, including 7 million visitors to its galleries in the UK. EY continues with its strategy to invest for growth. Last year the firm reported Â£1.6bn UK revenue, saw a 10% increase (1,200 jobs) in headcount and maintained its position as one of the UK’s top ten graduate employers.

This collaboration between two internationally-recognised institutions has the potential to help build a better working world for their visitors and clients respectively and the communities in which they work. 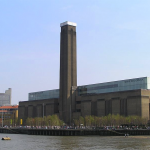 “EY has a long history of support for the arts and their record is a fine example of the benefits that such partnerships can bring both to companies and the arts. Tate depends on such support from the private sector in order to deliver its programme, while EY's position as a company with local knowledge across the world will also be invaluable to Tate as we develop our international associations in the future.”

“This unique relationship is a true example of how EY uses its investment and expertise to team with other organisations that share our purpose. Together we can make a real difference over the next three years, delivering on our shared agenda: promoting the importance and value of diverse perspectives and cultures, fostering entrepreneurial spirit, and contributing to the growth of the UK economy. The arts and the services sector can make a significant contribution to building brand Britain.”

Image By MasterOfHisOwnDomain (Own work) [CC-BY-SA-3.0 (http://creativecommons.org/licenses/by-sa/3.0) or GFDL (http://www.gnu.org/copyleft/fdl.html)], via Wikimedia Commons