Tax and the hard pressed motorist

Does government thinking about tweaking the vehicle excise duty for cars in the UK come as any real surprise?

It has come to light via a Telegraph report that the government is considering changing the VED in order to counter the loss of revenue suffered as people switch to greener cars. That is punish the driver for doing what the government wanted i.e. ‘go green’.

There is a double whammy headache here for the government. As people buy more fuel efficient cars they pay less in VED, if fact some new cars are zero rated for this tax. Then there’s the fall in revenue from taxation at the pump as these cars use less fuel (added to which the recession is not helping as people drive less anyway).

The total loss to the Treasury could be about £13 billion a year.

But we’re doing what the government wants right? So why raise these taxes in this way? Well to put it simply the state needs to spend your money and it is a better judge of what to spend it on than you are (or so it believes).

Consider what would happen if everyone was driven to use bicycles, do you not think that a whole industry of regulation and taxation would be developed around the ownership and use of bicycles? What if water meters were universally fitted and people used less? Do you really think your annual bill would drop when shareholders need their dividends and employees need their pay?

The same goes for every facet of our lives. From water use to gas to electricity. They put the tax and rates up to supposedly modify our behaviour, but does it? Next time you’re sat in a traffic queue just ponder that question.

Governments need taxes but need our general consent to collect them. So it attacks us from different directions and gauges how much it can extract from each of us so that the squeals of pain are about equally distributed (and the richest can squeal the loudest).

The government will therefore raise the rates to threshold that changes behaviour to the extent that it can say ‘it’s working’ without eliminating the revenue it can gather. 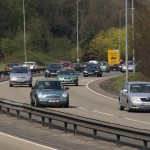 But the government does not just tax ‘bad’ things. Arguable the best thing that a member of society can do is an honest day’s work, but that is taxed (quite heavily), makes you wonder why. Then there’s spending, we need spending for growth we’re told; so a tax (VAT) is slapped on it.

No, tax is purely about gaining revenue, nothing more. And if a few spurious arguments can be made for gathering it along the way all the better. And further, if you can vilify some sections of society (drivers, smokers, drinkers etc) to further enhance your argument then even better.

Every time I look at the hideously complicated UK tax system and what it ‘punishes’ and ‘rewards’ I always end up with the conclusion that we need to completely trash it and change to a full Land Value Tax system.