The number of tax planning schemes disclosed to HM Revenue & Customs has fallen by a third in the year to September 30th to an all-time low as HMRC steps up its drive to minimise tax avoidance, says Pinsent Masons, the international law firm.

Pinsent Masons says that the number of tax planning schemes disclosed to HMRC fell to 77, down from 121 the previous year, a fall of 36%.

This is also the lowest number of schemes disclosed since 2004, when the requirement to disclose tax avoidance schemes under HMRC’s Disclosure of Tax Avoidance Schemes (DOTAS) programme was first introduced.

587 tax planning schemes were disclosed in 2004/05 and the number of schemes disclosed has been falling ever since.

The DOTAS programme was introduced as an “early warning system” to help HMRC identify new tax avoidance schemes as they are created or marketed, in order to review whether changes are needed to existing tax legislation and if necessary take action against the users and promoters of any schemes they deem to be abusive.

Jason Collins, Head of Tax at Pinsent Masons, comments: “The figures show that HMRC is taking a tougher stance on tax avoidance and winning the battle, if not the war, to eliminate elaborate tax schemes. They have been successful in dissuading the bigger accountancy firms from creating new tax avoidance schemes with many major professional services firms now avoiding the more extreme forms of tax planning as it carries with it a reputational risk.

“Companies and high-earning tax payers may still look for new ways to minimise their tax bill but the fact that there were just a fraction of new schemes last year compared to previous years suggests that HMRC is doing a better job at using its understanding of existing avoidance schemes to “police” the promoters and close loopholes in the law – often before they can be fully exploited.

“The additional information is also helping HMRC to take action against any particular schemes that cross the line from legal tax avoidance to illegal tax evasion – and HMRC won't hesitate to use it criminal powers, such as "dawn raids" and arrests, where there is even a whiff that a scheme is “make believe” or involves misleading statements.”

Pinsent Masons explains that even though HMRC has become more effective in reducing tax avoidance, they could potentially recover a still greater proportion of ‘missing’ taxes by doing more to encourage individuals and businesses to come forward and settle their tax liabilities should they wish to exit a tax avoidance scheme they might have entered into five or 10 years ago. While the rate at which new schemes are created is going down, old schemes are settled very slowly, creating an enormous backlog in the system.

In 2011, HMRC offered businesses that were using Employee Benefit trusts to minimise their Income Tax, National Insurance tax and Corporation Tax the opportunity to come forward and reach a financial settlement with HMRC prior to the tax structures being declared illegal through the courts.

Late last year, HRMC wrote to individuals using film financing structures and other partnerships designed to minimise income tax, offering to settle without progressing to litigation. Film partnership schemes are typically structured to allow investors to delay tax payments on investments over long periods of time with the financial gain from this delay often exceeding the end tax liability. However, HMRC has challenged numerous film schemes that it said were artificial or abusive with no real intention to make a viable film.

Adds Jason Collins, “HMRC is getting better at using the ‘stick’, but it could recover more of what it considers to be the UK’s missing taxes by making more use of the carrot.

“HMRC has introduced a number of tax settlement facilities in an attempt to encourage tax payers to come forward and leave tax avoidance schemes, but in reality these facilities have been largely ineffective because HMRC have typically insisted on most of the tax in dispute being paid. To make such a system work better, there needs to be a proper “amnesty” so that individuals and businesses have a reason to give up their claims."

“A broader HMRC amnesty would clear the enormous backlog of tax schemes, many of which have been around for more than a decade. HMRC could make clear that a taxpayer using the amnesty would face much tougher penalties if they engage in any new planning in the future.”

Pinsent Masons explains that the Finance Act 2013 gave HMRC beefed up powers to force tax avoidance scheme members to pass over information to tax scheme promoters and for the promoters in turn to give HMRC information about clients in the scheme. A “General Anti-Abuse Rule” was also introduced in July 2013 to tackle the most “egregious” forms of tax planning.

Numbers of Tax Schemes Disclosed to HMRC Have Fallen Since 2004 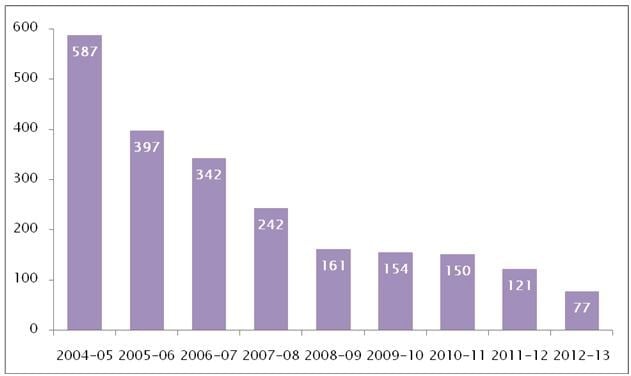