The tax rate paid by FTSE 100 companies has fallen for the fourth year running, according to new research by UHY Hacker Young, the national accountancy group.

A company's 'effective tax rate' is the value of a company's global taxes charged as a percentage of global profits.

UHY Hacker Young says that the increasingly international nature of the FTSE 100 means companies are generating greater profits overseas, allowing them to take advantage of lower prevailing tax rates in those jurisdictions. Additionally, reductions in corporation taxes around the world – including tax cuts in the UK – have helped multinational companies reduce their tax payments.

Roy Maugham, Head of (London) Tax, at UHY Hacker Young says:'Companies have a duty to their shareholders to keep costs low, and tax payments are a major cost. Companies are always exploring ways to make their tax payments as efficient as possible, which has helped chip away at their effective tax rates.'

'Companies have also been given a hand by governments around the world. International competition to attract corporate tax revenues is as fierce as ever, with countries offering new enticements to businesses in the form of allowances, reliefs, or tax cuts. This means the overall FTSE 100 effective tax rate is pushed lower and lower.'

Multinational companies including Amazon, Google, and Starbucks have recently been challenged by MPs over the amount of tax they pay in the UK.

Roy Maugham says: 'Multinational companies are in a difficult position over their level of tax payments as there's a lot of confusion in public discussions about the 'right' level of tax.'

'It can be perfectly legitimate for UK companies to pay parts of their tax bill in overseas jurisdictions with lower tax rates. The rules on the taxation of multinationals are very clear though, and if companies did cross the line with the movement of profits overseas, HMRC would be on them like a flash.'

UHY Hacker Young says that while the continual reduction in the UK's headline rate of corporation tax – set to hit 21% in 2014 – is a move welcomed by business, companies consider more than just the headline corporation tax rate when deciding where to base their headquarters.

Roy Maugham says: 'The UK government has made efforts to improve the attractiveness of the UK tax regime as a whole, but there is still some way to go.'

'The UK's taxes on non-UK profits or on dividend payments between different parts of multinational corporations have all been mentioned by businesses in the past as reasons to leave the UK and base themselves in countries with lower taxes. The announcement that WPP will return to the UK will be encouraging to the Government though.'

UHY Hacker Young says that while more than 20 companies left the UK for tax reasons between 2007 and 2011 – including advertising giant WPP and pharmaceutical manufacturer Shire – so far very few have returned.

Of the major companies that left the UK only WPP, business publisher UBM, and asset management firm Henderson have announced any intention to return.

Roy Maugham says: 'Whilst new rules on taxing overseas dividends and changes to Controlled Foreign Company rules have been implemented in order to tempt companies back or to the UK, few have done so. However, while the UK tax regime has become more competitive in some places, many international companies might be concerned by other changes, such as the proposed General Anti-Abuse Rule.'

'The General Anti-Abuse Rule (GAAR) could be very wide-ranging and open to a range of interpretations. Companies could be concerned that what they consider legitimate tax planning could soon all-too-easily be classed as abusive in the UK. The GAAR could be another reason to stay away or leave the UK.'

UHY Hacker Young says that countries including Canada, Finland, Greece, and New Zealand have all recently cut their headline corporation tax rate. Meanwhile, Italy has increased the generosity of the tax reliefs available to businesses. 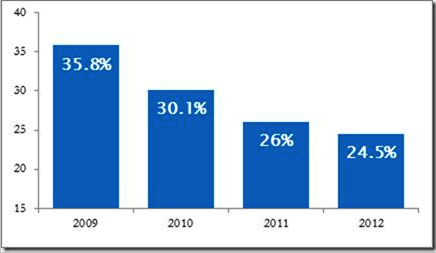 *This average is taken from the effective tax rates reported by the FTSE 100 companies in their latest annual reports or by their investor relations team between 1 November 2011 and 31 October 2012. This figure reflects the broad range of corporate tax rates and incentives available in the countries in which FTSE 100 companies operate.