A sort of land value tax for the wealthy investor.

A London council is proposing to place an extra charge on empty houses as locals have complained that some areas are in danger of becoming ghost towns due to the wealthy buying up the property as investment vehicles reports the Telegraph [1].

On the back of this comes a reduction in the demand for local services leading to job losses.

The council of Camden in North London already charges an extra 50% council tax on empty properties, which brought the number of empty houses down from 248 to 162. But it now wants to double that to 100% in the hope of bringing more houses back into residential use.

Writing to the Communities Secretary, Eric Pickles, Councillor Theo Blackwell said that the mismatch between housing costs and availability had reached 'crisis point' in his borough.

This is of course an extra tax on successful people who have chosen property as a way of investing their money. But it will help the council when there is an austerity drive on.

As house prices in certain areas rise so fast then surely everyone has the right to buy the property and do with it as they want. Whether that be live in it, rent it out or leave it empty – especially in a country where just about everyone who owns a house regards rising property values as a boon.

Or should houses be different and not just be regarded as a commodity?

Well, one thing's for sure; you can print as much money as you like but you can't increase the area of the land. So land and the property on it will always be attractive as an investment. That's why it should be taxed properly otherwise, as demonstrated here, it becomes lucrative just to own it and not use it.

A proper land value tax would ensure that all land was brought into use. No sitting on empty houses as the capital value increases, no supermarkets buying up the land just to stop potential competitors setting up in business there.

Council tax does not fulfil the requirements as it is really designed to pay for a proportion of local services. What we need is a tax regime that always ensures that land is being used. 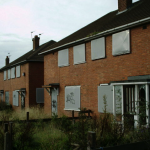 It might also reinvigorate town centres by forcing empty shops back into some sort of use. Landlords would either have to reduce rents or sell at whatever price they could get or wear the taxes.

Second homes would also be likely to be used more boosting the local economy.

All those boarded up properties would be rented out at affordable rates or sold at knockdown prices to people who were prepared to pay the tax and use them. In 2012 for example Empty Homes reported that 710,000 homes stood empty in England. Across the UK that figure is nearer 920,000 of which 330,000 are long term empty. So this is not just a London problem. Would not taxing them properly lead to their sale and/or refurbishment and put people back into them?

We keep being told there is a housing shortage. Maybe a lot of that could be solved with a proper land value tax.