Teachers and parents’ low level prejudice of financial services as a career, possibly caused by poor numeracy skills and a fear of numbers, is contributing to young people’s lack of understanding of sector: CISI/YouGov survey.

Young people’s low opinion of financial services as a career is being influenced by a generation of teachers and parents whose lack of understanding of the sector has possibly been shaped by their own poor levels of numeracy and fear of numbers, according to a survey.

Less than one in ten of young people said they would be interested in working in financial services, but the highest proportion (34%) expressed an interest in working in technology (e.g. IT, computers). 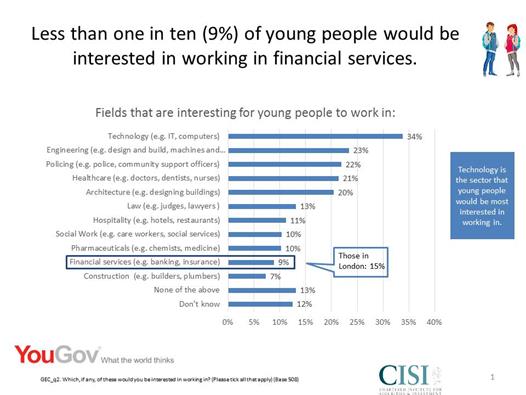 This, says the CISI, is an interesting response as IT is a crucial backbone of modern day financial services, with a wide range of IT jobs in the financial sector.

Only 19% of young people surveyed thought a typical working day in financial services would involve lots of talking, yet financial services, and wealth management in particular, is very much a “people” and client focused business.

The majority of young people chose the internet (59%) and parents (58%) as primary sources of information about jobs in financial services, with teachers ranked third as the most used sources (39%) for information on jobs in the sector.

Parents’ understanding of financial services was also low at 23%, although it was greater (32%) for those parents based in London. 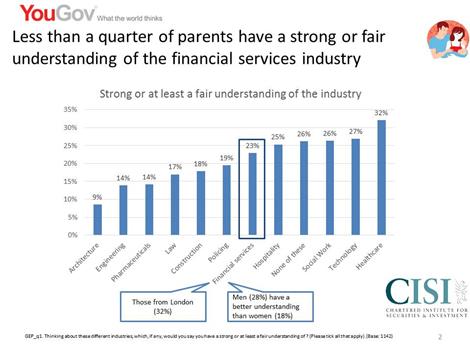 When parents were asked what they thought helps a young person most when trying to get a job in financial services, 49% of parents felt professional qualifications are a key factor, followed by good contacts (38%) and work experience (37%). 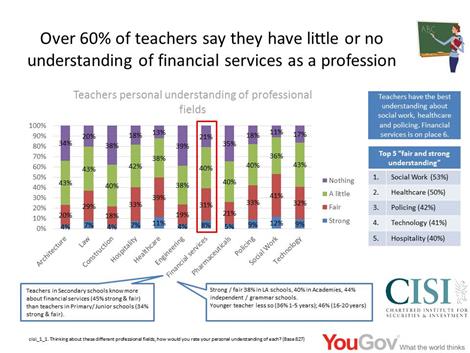 Less than half of secondary school teachers surveyed said they discuss financial services as a career option for their pupils (44%) but this varied across the country, with 60% of teachers in the East discussing the sector, compared with just 34% in the North.

The CISI/YouGov survey supports the Money Advice Service (MAS) report published in June 2012 which showed that parents in particular are key influencers on attitudes and behaviour between the ages of 5 to 12.

Although the MAS report focuses on personal financial decision-making, the correlation between the understanding of financial services in general is clear; this latest CISI/YouGov research shows that 66% of primary school teachers have little or no understanding of the financial services profession which will therefore have potentially negative consequences if the key age group they are teaching, 5-12 years, are where attitudes towards personal finance are formed.

In addition, according to the CISI/YouGov survey, the other key influencer on this age group, parents, on the whole, have a lack of understanding about financial services, with only 23% saying their comprehension of the sector was “strong” or “fair”.

Simon Cuhane, Chartered FCSI and CISI Chief Executive said: “Poor numeracy skills on the part of both adults and young people in the UK are creating a vicious circle and an inherent fear of numbers. This, in turn, seems to be contributing to a low level prejudice against financial services as a career amongst young people’s key influencers, teachers and parents.

“If the same CISI/YouGov survey was conducted amongst the same audience in China, would the results be the same? Are they as relaxed about weak numeracy skills as we are? The 2012 OECD PISA survey of 15-16 year olds showed that Shanghai-China had the highest scores in maths, equivalent to nearly three years of schooling above the OECD average. The UK was in 26th place on this list of 64 countries.

“Lack of understanding of financial services as a sector is one of the main points which has come through in this survey and we are very keen to continue working with teachers to help them overcome these obstacles. Our GCSE equivalent, Introduction to Financial Services, and our A level equivalent qualification, the Diploma in Finance, Risk and Investment, are now both on the national UK performance tables.

"With UK financial services contributing £65bn to tax revenues in 2012/2013, the largest contribution of any sector, the importance of the industry cannot be underestimated. Similarly, with some of the highest UK graduate salaries being available in the investment banking sector, we should not undersell to our young people the fact that financial services offers excellent opportunities for a good, exciting and rewarding career.”

One In Five Products Not Complying With Energy Saving Claims