A mathematical formula, which was used three years ago to predict the London 2012 Olympic medal haul at 63 compared to the actual number of 65, predicts that Team GB can expect to win 46 medals in Rio in 2016.

Team GB is only likely to clock up 46 medals in the Olympic Games in Rio in 2016, say researchers who used a mathematical formula three years ago to predict performance for London 2012, and came up with a medal haul of 63.

In the end, Team GB won 65 medals in London, so the prediction was only out by two.

The formula, published in the British Journal of Sports Medicine, is based on all cities and countries that have hosted the Olympic Games since World War II and the number of medals awarded to competitors from each country.

The approach, known as logit regression, takes into account medal tallies achieved before, during, and after hosting the Games, and includes the impact of home advantage.

The formula suggests that the odds of winning medals when hosting the Games, roughly doubles (2.05). So looking at the average tally for Britain’s athletes since World War II produces a figure of 31, which when multiplied by 2.05, indicates 63.5 medals.

“Anecdotal evidence suggests that the crowd had a positive effect on athletes to raise their performance, but also, based on these results, crowds appear to have had an important effect on influencing officials to favour the home based performers, and hence increase their medal winning capacity,” write the authors.

Historically the medal haul has dropped off in hosting nations by the time of the next Games, the figures show.

The formula reduces the odds of winning medals to 1.46 without the home advantage, so multiplying that by 31 gives a total medal haul for Team GB of 45 or 46 medals in Rio in 2016, roughly the same as the tally in Beijing in 2008.

Funding will clearly be important in helping to temper this decline, say the authors, who note Prime Minister David Cameron’s pledge to maintain funding for elite sports, but add that “the current and projected economic situation presents some stern challenges.”

The authors emphasise that Team GB’s accomplishments were “a testament to the achievements of athletes and their coaches” and a “source of delight and pride for spectators.”

But they add: “However, it seems unlikely that even maintained funding can make up for the benefits of a partisan London crowd.” 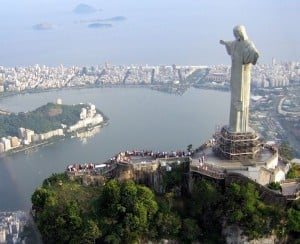