Team Sky – Cycling Under the Sea

Tour de France 2013 winner Chris Froome is the first person to cycle from the United Kingdom to France, under the sea.

As the world’s leading professional cyclists depart the UK after three days of enthralling Tour de France action, Jaguar has released a short film titled Team Sky – Cycling Under The Sea which documents the Team Sky leader riding from the Eurotunnel Terminal in Folkestone on England’s south-east coast, to Calais in France.

Froome rode through the tunnel at a training-pace, completing the world first ride in a time of approximately 55 minutes and reached speeds of up to 65 kilometres per hour.

Jaguar and Team Sky began discussions over six months ago with Eurotunnel, who are celebrating its twentieth year in 2014, to make the cycling challenge possible. The service tunnel is one of the highest security sites in the UK and France.

This ground-breaking achievement follows the recent launch of the Pinarello Dogma F8 at Jaguar Land Rover’s base in Gaydon. 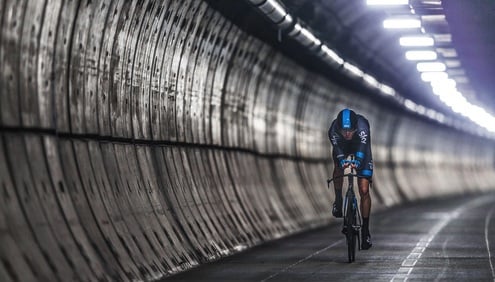