All eyes have continued to be on the euro area in the past week, with both Greece and Italy firmly in the firing line. Greek politicians, at least, have finally managed to agree who the interim Prime Minister should be, opting for Lucas Papademos, a former vice-president of the European Central Bank (ECB). And the three main parties backing the new national unity government have pledged to help push through the required legislation for Greece to qualify for its latest bailout payment, and the new â‚¬130bn rescue from other euro area countries and the IMF.

Having heard Papademos speak in person, I think he is a good choice. Despite some criticisms of what he should have known while running the Greek central bank, he is a solid economist and experienced technocrat. He will be under no illusions that the alternative to austerity – a likely forced exit from the euro area, if the ECB fails to support the Greek financial system after a disorderly default – would be far more damaging for the Greek economy than many believe. But even if he secures parliamentary agreement for the bailout package, he will probably be obliged to step down in February, when new elections will be held. That raises the prospect of further political uncertainty in 2012, even if all three major parties agree to austerity now.

Unfortunately, the political situation in Italy looks a bit worse. With Berlusconi finally promising to step down once his economic reforms are approved, officials there are also looking for an experienced technocrat to take the helm. Mario Monti, a former European Commissioner, appears to be the front runner. But, having also seen him up close and personal, I am not convinced he is as good as Papademos. The Commission isn’t as rigorous, focused or technical as the ECB, despite what some might claim. Even worse, there are signs that Italian political parties may be divided about the degree of support they offer both Monti and any future austerity plans. As Berlusconi’s measures will only go so far, and are unlikely to bring Italian government bond yields back down towards 4%, whoever the new PM is will face an immediate challenge to forge consensus. 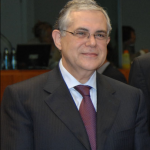 With the French also desperately talking up their fiscal retrenchment plans, this could easily all add up to chaos. Germany (and now France) seems very unwilling to provide the further support that Greece and others will need once things go wrong again, as they probably will. Open discussion and speculation about countries leaving the euro clearly does not help. But growth in France and Germany also appears to be going into reverse, meaning that even the macroeconomic fundamentals are now highly uncertain.

In the UK, politicians (and some central bankers) have been making much of the fact that the euro area’s woes are to blame for our insipid recovery. Don’t believe them. Even before conditions worsened in the wake of the July agreement between euro area countries, the UK recovery was already stalling. The Government’s early claims of an ‘expansionary fiscal contraction’ have been exposed as completely false, and the worst of the cuts is still very much to come. Even if Europeans get their act together on the debt crisis (admittedly unlikely), the UK would still be flirting with recession over the next year. And the key policymakers that really matter – Chancellor George Osborne and BoE Governor Mervyn King – seem unwilling to try anything different to stave off another downturn. With the current recession and recovery already worse than the Great Depression, at least in terms of economic activity, 2012 is looking very grim indeed.