"Tesco is expected to reveal a positive sales performance tomorrow, despite market predictions that the Big Four would post poor performance figures for the festive period.

"As Morrisons has already reported an increase in year-on-year sales for the nine weeks to January 3, up 0.2%, and Sainsbury's reported that like-for-like sales for the festive period had fallen by only 0.4%, better than the predicted 0.6% forecasts, investors are eager to see where Tesco will reside.

“Tesco remains the most traded retail stock for our customers, with volume continuing to increase in 2016 and sentiment overwhelmingly being positive (66% Buys)  highlighting confidence in a positive announcement tomorrow. 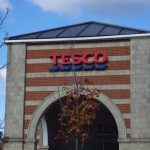 "The year started off on the right foot for the supermarket giant as its shares surged from its lowest level in nearly two decades, almost 7%, to 155p on Tuesday – making it the biggest riser in the FTSE 100 index.

"Investors should be aware of the fact that the unexpected increases suggest that the major supermarket chains are pushing harder against disruptor stores Aldi and Lidl, which both saw a rise in sales in the three months to 3 January, up 13.3% and 18.5% respectively.”