Whilst London, Surrey and the home counties blossomed under Margaret Thatcher's tenure as Prime Minister, South Wales was utterly destroyed by her iron will.

Many of you reading this article will have a very different perception of the 'Iron Lady' and her legacy to my own, but that is because I grew up living between the mining towns of Rhymney and Merthyr Tydfil.

Both my parents were Conservatives so my view of ThatcherÂ is not based on a young child's exposure to his parent's anti-Thatcher rhetoric echoing across the dinner table, far from it.

I can honestly say that like many Welshmen I am glad that the mines are gone, I remember the miner's coughing up their lungs in myÂ parent'sÂ pharmacy andÂ deliveringÂ oxygen to them at home with my father.

It is all too easy to forget the lives claimed by theÂ industrialisationÂ of the Valleys.

The spectre of death hung over those coal towns and the fear of another mining disaster wasÂ embeddedÂ in every mother's heart so no, I am very glad that the mines are a thing of the past.

But Margaret Thatcher was not interested in the well being of the people of South Wales and her crusade to tackle the unions head on inÂ vengeanceÂ for bringing down the previous Edward Heath government bordered onÂ obsessiveÂ and communities across Wales were devastated in the wake of thisÂ obsession.

Have no doubt, Thatcher wanted the mines closed and, as previously stated, there was merit in this but how she went about it is the reason there have been celebrations up and down Wales since the news of her death.

Personally I will notÂ celebrateÂ or condone the celebration of someone's passing but neither will IÂ condemn Thatcher's victims indulgingÂ in rejoicing her passing whilst they are still livingÂ with theÂ consequencesÂ of her heartless destruction of their communities.

There was noÂ proposedÂ alternative employment for the miners and not a mention of a phasedÂ relocationÂ from one industry to another, instead the message to the Â miners was simple, take theÂ redundancyÂ money (if they were lucky) and get on your bike to look for work in a region where the primary industry had just been ripped out.

So the miners fought back only to be met by the Iron Lady's brutal fist resulting in one of the most shameful periods in British policing as miners were ruthlessly beaten back into submission.

I remember the father of a friend of mine being carried through the high street by his young sons covered in blood after taking beating by the police at a march. He was a proud and decent family man who raised two very fine boys however he never got over the events of the miner's strike and like many other former miners left on the scrap heap with no future, he drank himself to an early grave.

Marches and protests were not the only methods ofÂ rebellionÂ against Thatcher's regime, the main weapon in the hands of the miners was strike action and the NUM eventually called for a national strike.

Communities pooled food and resources to keep the families of striking miners going and I remember tin can collections going from door to door and my school friends whose fathers were miners really did suffer, not justÂ financiallyÂ but from the stresses at home resulting from the strike.

However for some families it was all too hard and many marriages which had previously passed the test of time ended in 1984.

So out ofÂ desperationÂ a few miner's broke the picket lines and this caused even furtherÂ division within communities and many of thoseÂ divisionsÂ still remain to this day as those that broke the strikes and their families were branded 'Scabs'.

The tensions surrounding the breaking of picket lines culminated in the death of taxi driver David Wilkie who, whilst taking two picket line breaking miners to work, was killed by two striking miners after they threwÂ a concreteÂ block from a footbridge onto his taxi.

And Wilkie was not the only one to lose his life as a result of these tensions.

Suicide rates, unemployment, crime, drug use and alcoholism all soared as a result of the closing of the mines and it was not just the miners who were affected.

Shops andÂ businessesÂ in mining towns across South Wales were boarded up as the wealth was removed from the area alreadyÂ reelingÂ from a decline in heavy industry so theÂ privatisationÂ of British Steel was the end for the people of South Wales.

In ten years the valleys of South Wales had gone from a series of close community towns whoseÂ very identity was centred around the mines and heavy industry where you could leave your front door open without fear of being robbed, to a poverty stricken sickbed filled with the crime that goes hand in hand with theÂ aforementionedÂ poverty.

Back in the industrial revolution Merthyr Tydfil was the centre of the world and one could say with confidence it was theÂ innovationsÂ taking place in South Wales iron production and mining Â that gave birth to much of the modern world.

Margaret Thatcher took a people who contributed so much towards Britain's prosperity and unceremoniously destroyed their way of life and means of provision without replacement becauseÂ it conflicted with her new vision of Britain as a world centre for financial services.

London and the South East became the focus of building this newÂ financialÂ services 'industry' in Britain whilst Wales (and the North of England) were left to rot.

All this was a long time ago but for the people of the South Wales Valleys the scars cut by Thatcher have not fully healed but the question remains who should pay for her funeral? 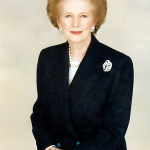 As you can imagine, many in South Wales are in uproar at the idea of the state funding her multi-million pound funeral but I think theÂ  funeral should be done in the spirit of Lady Thatcher herself.

By that I mean her family should be means tested for the funeral expenses.

The Falkland islanders, Londoners, Bankers,Â ParliamentaryÂ sycophants, opportunistic journalistsÂ Â and inhabitants of the South East all have reason to cheer Lady Thatcher's funeral procession in another jingoistic flag waving day, but please do not expect the sameÂ responseÂ from the South WalesÂ the valleys where the name 'Thatcher' is synonymous with pure evil.

I don't think Â I can sum this up any better than the words of Â the great Merthyr actor, Jonathan Owen.

Commenting on the passing Lady Thatcher, Owen saidÂ "she faded like an old bully from your school days into someone who sometimes clouds your dreams from another life time, someone who once dominated your life but is now a ghost."