With the passing of Baroness Thatcher earlier this week, many commentators have been reviewing her impact on the UK, and the legacy that will outlive her. It is for others to talk about her impact on personal attitudes, Europe, legislative changes, politics and societal structures – if indeed there is such a thing as society. But it is also important to consider her economic legacy.

It is fair to say that, in the 1970s, the balance of power between workers and businesses was skewed more towards the former. With her strong stance against the unions, culminating in the fight against the Miners – and indeed the privatisation programmes – Thatcher unambiguously shifted this balance of power in favour of companies. There were pros and cons from this, as there are with any such change – but one thing it did do was greatly lessen the chance of second-round inflationary effects, or old-fashioned cost-price spirals. This is simply because workers were now unable to resist the necessary declines in real wages (which would have happened anyway) when oil or other prices jumped.

Privatisation is another area where her record is mixed. By most accounts, some were very successful – BT and BA are arguably good examples here, as both companies had to adapt to and then thrive in a competitive market place. Other privatisations were notably worse, as rail travellers will probably attest, and the privatisation of utilities in particular has not led to quite the surge of investment that some predicted. Recent complaints about high energy costs suggest that private sector pricing strategies are a concern for households, but these must be set against the impact of the price and wage policies from the 1970s. By and large, we all still get water, gas and electricity, and at least now we have a choice of who we buy it from (even if we’re not necessarily happy about where the profit goes).

Perhaps her greatest privatisation scheme was the ‘right to buy’ – letting council tenants buy their properties at marked-down prices. Being a fan of social mobility, I think this could have been one of the hallmark policies of Thatcher’s premiership. The fact is, however, that the scheme has been shown to have severe adverse effects, mainly because the properties that were sold off were not replaced in sufficient numbers. It is all very well giving one (part of one) generation a leg up, but ideally the opportunity should be available to all – people needing somewhere to live today not only now face a shortage of affordable housing, but typically won’t benefit from the same opportunity. 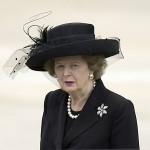 Thus far, these are all fairly microeconomic issues. In terms of Thatcher’s macroeconomic legacy, two claims are often made. The first is that, by liberalising markets and cutting back the state, Thatcher generated strong economic growth. While some reforms were definitely helpful, this claim is simply not true. Not only did Thatcher not take an axe to public spending as a share of GDP over her premiership; there is also no sign of a shift in trend productivity growth over the 1980s. To be fair to Thatcher, the latter is a hard act to pull off – trend productivity growth in the UK has wobbled around a lot but basically always come back to its average for most of the past 160 years (setting aside World Wars). But the comparison people often make with Germany and France over the 1980s is a false one; those countries had their own particular issues at that time. Thatcher categorically didn’t raise trend growth in the UK.

The second claim holds more water; that inequality increased dramatically while she was in power. Even right-wing commentators acknowledged this, when pushed, as the data are pretty unequivocal. During the 1980s, the poor saw some improvement in living standards, the middle class a bit more, and the rich generally a lot; the ‘proceeds of growth’ were not equally shared. How concerned we should be about this depends on what kind of society we want to be; in the US, for example, inequality is often seen as the price for offering everyone the ‘American Dream’ (even if few people ever truly reach it). And to some extent, the reaction in 1997 and subsequent plethora of tax credit and other benefit schemes were a push-back against the significant divergence in incomes seen during the 1980s.

Homogenised, pasteurised and standardised; the problems of popular suffrage.