There is a wealth of research on Black Friday and its digital twin Cyber Monday, ranging from data collection as an economic indicator to looking at the whole process as a sociological phenomenon.

One study performed in 2011 by researchers at Winthrop University (1) looked at the biggest shopping time of the year and found that it was an economic ritual that could be broken down into four behaviors:

Of the 38 women interviewed, ranging in age from 20 to 70, bonding over the buying ritual with family and friends was a central theme. The Black Friday shopper sees the event less as a chance to pass down stories to a child and more as a foxhole bonding experience. The women interviewed used language like “adventure” and connoted a sense of danger with the shopping endeavor. Consumers differ in behavior between Black Friday and Cyber Monday with the former being more exciting and the latter, more functional. Some retailers are trying to introduce a sense of adventure into their e-commerce campaigns. For example, Turkey-based biscuit company Biskrem created an adventure app for its Instagram platform, resulting in a 850 percent growth in marketing penetration. 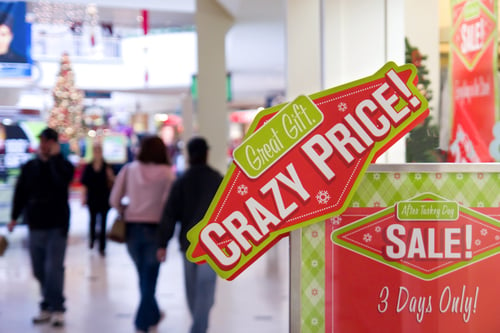 Both Black Friday and Cyber Monday have shoppers investing a large amount of time planning for the event. Most importantly, the Winthrop study found that the strategic planning process was performed as a group. This supports the relationship theory of marketing, which is well used in social media marketing. According to TechTarget, the goal of marketing is to create strong, emotional relationships within the cohort and the business. A smart use of this theory and the study findings is to make the pre-event as important and shareable as the sales event. Sporting goods retailer Cabela's is a good example. On its main site page, it has a video to hype the adventure aspect and all of its Black Friday sales are prominent in PDF format that can be shared via email or social media.

Black Friday is a competitive sport, according to this study. Respondents alluded to the fact that these shopping days were a race in which the goal is to get the goods before anyone else does. In brick-and-mortar companies, the result is an influx of buyers racing through aisles to gain their prizes faster than the perceived competition. Last year, Best Buy had a site crash on Black Friday because there were so many people trying to navigate it. Over the last five years, big players like Walmart, Toys "R" Us and Kohls have had devastating Cyber Monday crashes. The moral of the story is that all businesses should talk to their web host and make sure they are prepared.

The last of the ritualistic shopping behaviors identified in the Winthrop study is a sense of a mission being accomplished. At the end of the day, participants have a drop-the-mic moment when they can sit back and know they are primarily finished with what is often seen as the worst part of the holiday season. These two days are more than fixed points of an economic indicator. They mark the beginning of the end of holiday madness and the start of the fun and love that is the holiday season. Out of everything mentioned above, marketers need to keep this in mind.