The cost of being a pensioner is 37% lower in the North East than in the South East, Key Retirement's analysis shows

The average cost of being a pensioner is £11,200 a year, analysis by leading over-55s financial provider Key Retirement* shows.

The cost adds up from spending on the basics including food, clothes, travel and heating with a weekly £215 needed per head, Key's analysis of Government figures on household expenditure shows.

However the annual average for the country as a whole conceals huge regional variations with retired people in the North East needing £9,630 a year compared to £13,216 in the South East – nearly £3,600 a year less or 37% lower.

Key's analysis shows the average retired household spends around 15% of their budget on fuel and housing – equivalent to around £1,680 a year – narrowly ahead of the 14% they spend on food and non-alcoholic drinks – which equates to around £1,568 – with transport taking an 11% bite out of budgets. Average food bills have increased by just £5 on last year while spending on fuel and housing has increased by nearly £200.

Key is urging pensioners and those approaching retirement to maximise income from all sources including property wealth to ensure they have the money to fund the average annual cost. Its research shows over-65s have £827 billion invested in their homes.

"The basic cost of being a pensioner at around £11,200 a year highlights the importance of planning carefully for retirement and getting the best possible advice to ensure a comfortable lifestyle.

"The recent good news on price rises slowing down as inflation falls, as well as cuts to major expenses such as gas and electricity bills and the fall in petrol and diesel costs, should mean a drop in the cost of being a pensioner this year.

"But it is crucial that pensioners and those in the run-up to retirement focus on their retirement income as the current basic State Pension, and even the new State Pension planned for next year, will not cover the basic costs of being retired in any region of the UK.

"Anyone approaching retirement will need to find other income in order to meet the basic costs and should look at all their assets including savings or pensions, plus the money invested in their home. On average customers released nearly £64,800 from their homes last year through equity release; which could, for many, prove life-changing in meeting the costs of retirement."

The table below shows the differences across the UK and how costs this year compares with 2014. 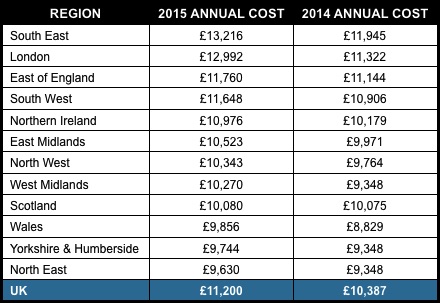 Anyone looking to release equity from their home can get Key's independent guide to equity release by calling 0800 531 6010 or visiting https://www.keyretirement.co.uk/equity-release/free-guide/.