Standard RPI Linked annuity rates: RPI Linked annuities remained fairly stable over the month, with only Legal & General making a significant increase of nearly 2% in their rates, although it remains in second place behind Standard Life which stays in the top spot, with an income of £3,070.80 on a single life basis and £2,698.80 on a joint life basis. Legal & General is only £11.40 behind it for a single life and £17.40 for a joint life. Canada Life and Aviva, in third and fourth places, are some far behind the top two in the amount of income they will provide, with Aviva’s rates again remaining unchanged throughout the month.

Smoker rates: Reliance Mutual was the big mover in September, raising its rates by between 3% and 4% to move into first place in the joint life tables, replacing LV= which cut its rates by just over 1% and slipped into third place. Reliance Mutual is now paying £5,823.12 per year for a male aged 60 and female aged 57, compared to Just Retirement which cut its joint life rates by 0.4%, but maintained second place with an income of £5,751.00. For single smokers LV= remains in first place despite cutting its rates by 1.4%, which means that it now gives an income of £6,397.00, down £90 on last month. Just Retirement and Reliance Mutual remain second and third, but only £10 and £41.32 respectively behind LV=. Scottish Widows replaces Partnership in fourth place, with an income of £6,192.84.

(All rates based on £100,000 Purchase Price, no guarantee period, payable monthly in arrears)

“Whilst standard annuity rates have largely risen again in September, the market still does not seem to have accounted fully for the recent increase in gilt yields, with rates only being back to the level they were at in June 2012 when gilt yields were 90 basis points lower.

“Movements in rates occur on a weekly basis and it is therefore always worthwhile obtaining an up-to-date illustration to make sure that the best possible income is being obtained.”

For more information on the latest annuity rates or retirement services please contact The Annuity Bureau on 0845 850 8550 or visit www.annuitybureau.co.uk 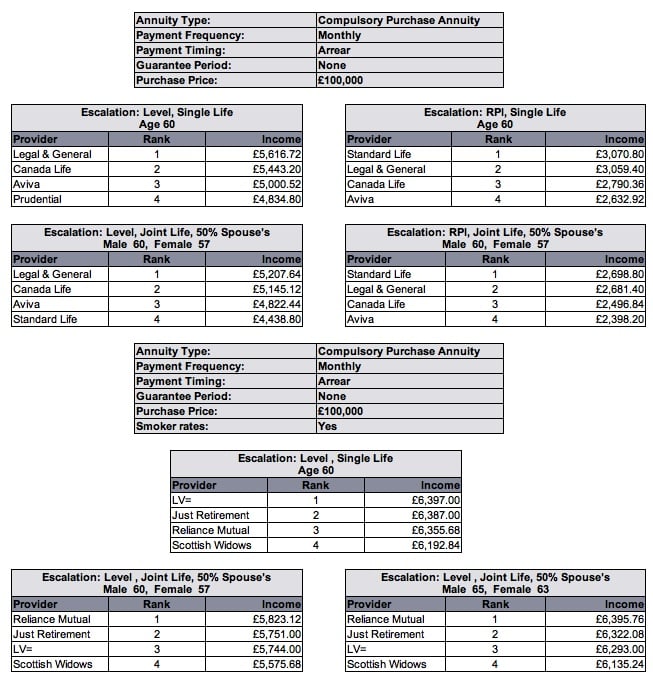 Mortgage fraud is still with us

Labour Calls on Theresa May to be 'Straight With the People'