In keeping with a series of increasingly bizarre addresses to the candidates, Lord Sugar introduced this week’s urban art challenge via video link in the heavily-graffiti tagged confines of the arches at Waterloo. It was probably meant to appear avant garde or at least a bit edgy, but Sugar was reminiscent of Patrick Moore in long-lost kids TV show Gamesmaster, a faintly malevolent floating head intended to instil fear and wonder.

This being a task for creative types, there were but two choices to fill the leadership berths: Gabrielle, who had previously shown some aptitude in this field, and Tom, who professed to ‘know a little bit about graffiti’, which is like saying you know a little bit about biscuits. He was deadly serious, though, talking of ‘curating’ his collection, rather than selecting from a small panel a pair of artists capable of appealing to Brick Lane hipsters and meeting the advertising brief of a bankable corporate client. Talking a lot more sense was Adam, becoming more endearing by the week, who pulled off a cute piece of iconoclasm in comparing Banksy to The Stig – fortunately for him, out of Tom’s earshot. (Out of Banksy’s, too, in all probability, although you never know.)

The problem for the teams was the saleability of the panel of artists, or the lack thereof. Both teams wanted to display the work of emphatically-named Shoreditch based artist, Pure Evil, forcing him to choose between Gabrielle’s enthusiasm and Tom’s art-bore pretensions. Pure Evil chose wisely, leaving Tom (who was sans plan B) to opt for the work of James Jessop, whose pieces could be described in two words: expensive and enormous. Not as in enormously expensive, you understand, as in the-size-of-Canada enormous. 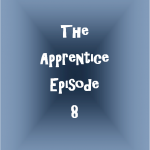 This meant that if Tom could sell one, he would surely win. He couldn’t and lost, albeit narrowly. Looking flushed of face and red of eye, Tom was a flustered mess in Lord Sugar’s boardroom, surviving only by virtue of a good track record thus far. Laura, who was blessed with no such record, was fired. She seemed a bit flustered, too, telling Sugar to ‘take care’ on her way out of the door.

Perhaps she feared for his safety as The Gamesmaster. Those pre-pubescent gamers can be vicious, you know.

Economic Voice Favourite: Stephen is on a terrific run of wins.

What We Learned: You need know nothing of art to be able to sell it, as Adam proved.

Next Casualty: Jade is walking a very thin line.