Lord Sugar has a sizeable number of attributes listed in the ‘Essentials’ section of the job description for his potential apprentice: shrewdness, common sense, bravery, determination, graft, the ability to tell tat from treacle etc etc. Such has been the experience of Stephen in this season’s run that he must be tempted to promote linguistic ability from the roster of ‘Desirables’ to join them.

Stephen’s inability to spell the word bellissimo contributed to the disastrous launch of a Mediterranean table sauce in Week 3. This week, he half-repeated the trick. Faced with the challenge of raising the awareness of, and identifying a new market for, English Sparkling Wine – a product rightly or wrongly thought inferior to its more illustrious French competition – Stephen suggested that they brand it ‘Grandeur’. Yep, that boxed off the quintessential Englishness that the brief demanded, alright. Had he been required to re-brand English coastal towns as weekend destinations to rival Paris, one imagines that Stephen would have arrived at Chic-hester.

On The Apprentice, though, the scale of one man’s folly is under constant threat of being dwarfed by that of the next. Step forward Tom. The proprietor of a fine wine company, Tom should have been on firm ground here and was handed the chance to redeem his reputation as a pseud, gained in last week’s urban art debacle. However, in using his leadership position to educate Adam in the finer points of wine tasting (‘notes of vanilla’) while delegating the pesky campaign work to Nick and Jade, it became apparent that this was a chance he was willing to squander. 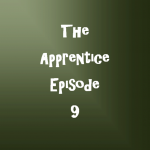 At least Tom was taking matters (and himself) seriously. On the other team, Ricky was doubly hamstrung by an inappropriate name (something he should be used to) and a jokey, shoddy advertising campaign overseen by Stephen and Jenna. So, despite having a better logo (designed by Gabrielle), a better strap line (‘less fizz, more sparkle’) and delivering a superior pitch, he still managed to claim another loss as leader.

Jenna took responsibility for the misguided tone of the advertisement and took her leave of the process, allowing Stephen to assume the position of the embattled football manager: we’ll win next week. On your ‘ead (be it), son.

Economic Voice Favourite: Last week, we tipped Stephen. What do we know?

What We Learned: A wine bore is less annoying than an art bore. Marginally.

Next Casualty: At least one individual is one defeat from the door.