Still clinging onto the coat tails of all that is current, Week 10 of The Apprentice saw the candidates acting as the agents of a high-end daily deals website. They were asked to negotiate the best discounts at a range of businesses and present them to the website for publication.Â  As ever, among the hifalutin’ interpretations of the task’s aims, Adam cut to the chase: ‘Living the dream ain’t exactly about going ten pin bowling with your mates.’Â  Well, quite.

This isn’t quite true.Â  Stephen’s team did all the chasing – seemingly driven by his own desperation to remain in the competition – while Jade took a more selective view of the businesses she chose to approach, based on exclusivity and desirability.Â  This was a far cry from her first, thoroughly disorganised outing as project manager – a point that would not have been lost on already-departed Azhar, had been watching and not honing his skills on Paths of Glory.

If Stephen possessed a strategy, it was oblique.Â  Exuding an air of panic, he made appointments on the fly and targeted experience that said ‘luxury’ far less than they did ‘sports-section-of-the-newspaper’ (‘power whitening’ dentistry, anyone?)Â  Worst of all, he didn’t seem to know his own mind, letting Ricky dissuade him from a visit to an out-of-town hotel and spa that had the potential to be the vast sticking plaster to his slow puncture. 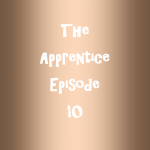 Having declined more presentable opportunities during this series, Lord Sugar decided that this was the moment to dispose of multiple candidates.Â  Stephen’s failure to keep his promise of delivering a redemptive victory may have rendered his exit inevitable but, in keeping with his innate sense of theatre, Sugar fired Gabrielle first.Â  She was somewhat unfortunate, it must be said, although her most meaningful contribution was to suggest that a high-end website carry an offer more befitting a pink cowboy hat-wearing hen party.Â  If only Adam had been on hand to explain the point of ‘living the dream’.Â  Shame.

Economic Voice Favourite: Nick appears to have timed his run to perfection.

What We Learned: Complimentary tea and coffee really matters to Adam.Â  We may have found the new Hotel Inspector.

Green Lantern given the red card