The balance of growth – speech by Ben Broadbent

In a speech at the London School of Economics, Ben Broadbent – external member of the Monetary Policy Committee – addresses two key questions relevant to the current debate over the economic recovery. Why have real wages declined, and should we expect them to pick up? And does the composition of growth today tell us anything about growth in the future?

Ben begins by observing that, now the recovery is here, concerns about the absence of growth have been replaced with worries about its composition: "In particular, it is argued, the recovery will run out of steam without a rise in investment because of an ongoing contraction in real wages…Growth is therefore caught in a nasty scissor movement between a decline in real wages, which limits the room for further growth in household spending, and perpetually stagnant business investment." He asks whether this view holds up to scrutiny.

He explains that wages have grown relatively faster than profits during this recovery, in contrast to the average post-recession experience. But, “for a variety of reasons, relative prices have moved against consumers”, so that “what UK residents pay for their consumption has risen much faster than the price UK firms get for their output.”

Ben identifies three factors that have “driven an unwelcome wedge between the prices of what the UK private sector produces and what it consumes”: the rise in indirect taxes over recent years; movements in global prices that have increased the price of goods relative to services; and the weakness in aggregate productivity growth, which “has been much worse in sectors that produce consumer goods and services than in others.” 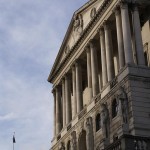 Ben has a positive view about the outlook for real wages: “encouragingly, there are signs these headwinds are beginning to abate. Tradable goods prices have stabilised, the services terms of trade have recently improved…and there has been no further rise in indirect taxes.” That would, he says, “clearly benefit the purchasing power of UK income, wages included, supporting the real growth of consumption.” The most important factor – the common driver of growth in both average earnings and GDP over time – is productivity, where “the majority of forecasters, including the MPC, also expect faster growth.”

More generally, Ben cautions against “inferring too much about future growth from its current composition.” He presents evidence to show that, in the short-run, the composition of expenditure holds few clues about future growth: “We like to tell ourselves that the composition of expenditure matters for future near-term growth – “because” consumer spending or investment in inventories are strong one year growth in aggregate demand will “therefore” be weaker the next – but, in truth, the data provide very little support for such claims.”

Instead, Ben says that it is fundamental factors – such as productivity and growth in the Eurozone – rather than any imbalance in the growth of expenditure or income “that will determine the path of the recovery and the long-awaited growth in incomes it delivers.”