In a speech today, Jon Cunliffe explains how the Financial Policy Committee and Monetary Policy Committee work together to meet the Bank's new mission, which is "promoting the good of the people of the United Kingdom by maintaining monetary and financial stability".

The MPC's role is to balance supply and demand in the economy to get the best outcome consistent with keeping inflation at target in the medium term.

"To use a familiar but imperfect metaphor, the Monetary Policy Committee is like a driver steering a car down a winding road. It can dimly see the road behind, but can only forecast what the road ahead looks like. The instruments usually give unclear or contradictory readings."

The MPC, Jon observes, tries to keep the car at the highest speed that can be achieved without risking having to jam on the brakes at the next bend or having to floor the accelerator to prevent stopping.

"To push this further – and perhaps too far – for (the) Financial Policy Committee's role in relation to the financial system we need a rather different metaphor. The FPC is more like the safety authority for a race track."

"Its job is to see that the safety standards for the track and for the cars are high enough. That there are sufficient buffers on the bends if one of the cars comes off the track. And that, if there is crash, the wreckage can be got off the road and does not cause a multiple pile-up."

Jon makes the point that, similar to a track authority, the FPC is not only concerned about ensuring the track is safe. If conditions become riskier, it has the responsibility to bring the safety car onto the track to slow the other cars down.

"Sometimes a race has to be interrupted because it becomes too risky. The FPC sometimes has to do the same."

In making these judgements, the FPC needs to be coordinated with the MPC, so the latter can take them into account in steering demand in the economy as a whole. But the focus of the FPC is financial stability risk: ensuring the system is robust to stress and taking steps to make periods of stress less likely and less severe. That is its comparative advantage. 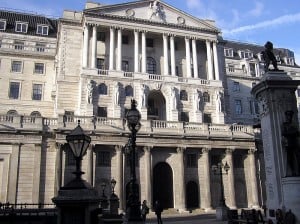 The stress test of major UK banks and the FPC's action on the housing market are two examples of how the FPC approaches the task of ensuring the financial system is robust to stress, and how it takes steps to make periods of stress less likely and less severe.

The stress testing scenario announced in April has been specifically designed to represent a chain of events and challenges that, though plausible, is very unlikely: a 4% drop in GDP, a rise in unemployment of over 5 percentage points, a rise in interest rates and 35% fall in house prices. It is not a combination of events that are expected or likely to happen.

"To go back to my earlier imperfect metaphor, we want to test whether the track and the cars can cope with an unlikely but plausible combination of adverse circumstances," Jon says.

The FPC announced two actions on the housing market last week. First, that when lenders are assessing applications for mortgages they test whether the mortgage would be affordable if interest rates were to be 3% higher. And second, that no more than 15% of a lender's flow of new mortgages should be more than four and a half times the borrower's income.

These measures do not bite now on the market as a whole. They should instead be thought of as insurance against a substantial increase and concentration in household debt that could make a crash more likely and more severe.

"Consistent with its role as risk manager, the FPC has acted in advance to identify and to protect against a very major risk to the financial system and the economy."

To conclude, Jon says: "The Bank of England is for stability. Monetary and financial stability. We aim to address that through the actions of the MPC and the FPC."

"The first aims to balance supply and demand and so steer the economy to keep control of inflation. The second aims to preserve financial stability by ensuring the underlying financial system is resilient by identifying risks and taking action to prevent them crystallising."

20% of graduates earn less than the A-level average wage