The British 10K Kicks Off in Westminster

The hugely popular annual race took runners down the Embankment and past the likes of Big Ben, Trafalgar Square and Westminster Abbey. For those looking for a new summer wardrobe, the unique race takes you along Regent's Street past some of the best shops in London.

The 2017 British 10k was won by Scott Overall and Gemma Steel with times of 31:05 minutes and 33:36 minutes respectively. Scott said of his time "I decided at the first kilometer to really go for it. I love running in London and the route was great fun." Gemma said, "I travelled down from the Midlands to run today. It was a tough gig today but I really wanted to test myself. The support from the crowds was amazing; I've never known anything like it!"

Virgin Sport CEO Mary Wittenberg added, "We love being in London! Everybody in the community has been so supportive of what we're trying to achieve and we feel like everybody has really embodied the Virgin Sport spirit. We wouldn't be able to do what we do without assistance from a number of community groups, charities and local running clubs, so the fact that they're all so willing to be involved is incredible". 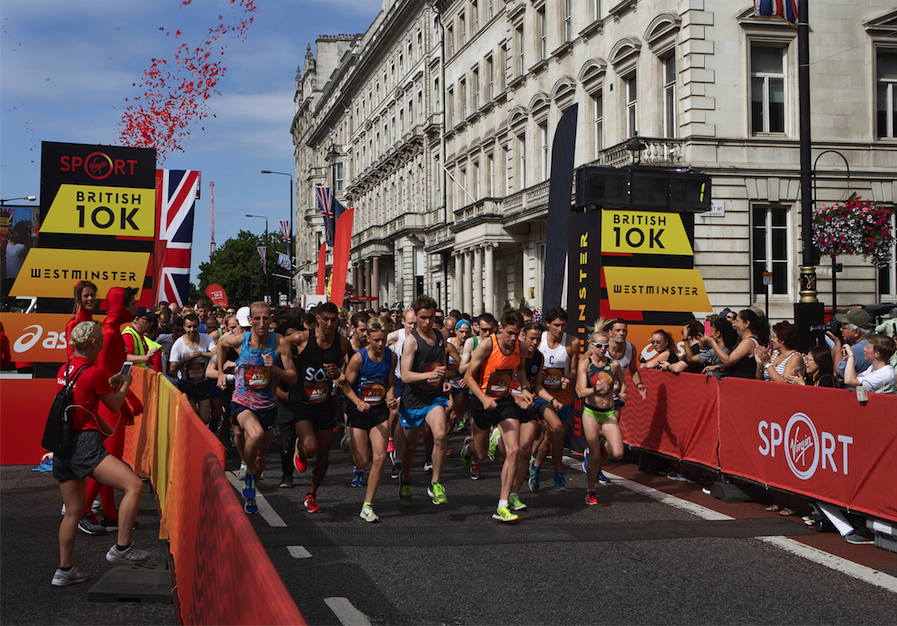 Virgin Sport prides itself on encouraging participation at all levels, and stress that the 10k is about getting more people moving together. That's why they have partnered with the BackPackers, one project from Chevy Rough's Chasing Lights Collective. The BackPackers support all those runners who were maybe too intimidated before to join in. On Sunday they supported as official pacers offering "Joggy," "Joggier," and "Walk/Jog" paces to support everyone taking on the challenge. Community Captain of the Backpackers and Pacer Leeanne Adu explains, "I'll never be an elite runner. I know how it feels to finish last in a race and that's why I started doing what I do. Running with like-minded runners in the Virgin Sport British 10k, not worrying that you're holding anyone up and identifying why you're there in the first place is what's important to us."

The British 10k: A relatively flat 10k, running past a host of incredibly iconic and historical buildings through the epicenter of London's Westminster

Music: Route entertainment (every KM) included tribute bands such as Not The Rolling Stones and Vox Beatles, along with Royal AirForce Cadets and the British Military Brass Band.

Registration for the Virgin Sport Oxford Half Marathon on 8th October 2017 and is now live on VirginSport.com. Participants can register themselves, friends, teams and fans. Enjoy one of the most picturesque half marathon's you will ever embark on.

Today Virgin Sport has also opened registrations for the Hackney Festival of Fitness 2018 featuring the Hackney Half Marathon on the 20th May.

Virgin Sport is co-located in New York City and London, and led by CEO Mary Wittenberg, former President/CEO of New York Road Runners and Race Director for the New York City Marathon. In the coming months, Virgin Sport will expand to new festivals of sport and active lifestyle products in cities and communities around the world.

To find out more about Virgin Sport and to register for upcoming events, visit: www.virginsport.com.