Annually, the British economy benefits from £3.5bn by lawyers from abroad – nine out of ten commercial arbitration cases in London involve an international party. 2012’s £3bn dispute between Russian powerhouses Roman Abramovich and Boris Berezovsky is thought to have made tens of millions of pounds for London legal firms.

When it comes to legal services, we’ve got this. Would you believe that the sector contributes £20bn to our economy, in general? New buildings have had to be opened due to the large demand for British justice (they’re flocking in from all over the place!).

Saudi Arabia has even suggested creating its own centre in London, so it can resolve oil disputes that involve many millions of pounds. Honduras may also decide to use the UK legal system as a guarantee that its investors will receive justice, should something go awry. 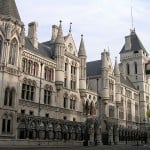 Royal Courts of Justice by sjiong

Commercial courts have been bolstered, while legal and civil aid has been cut. Wealthy foreigners are welcome to come settle their disputes on our soil, but access to justice for our own poor and vulnerable is extremely limited, ever since the coalition government slashed any benefits. Legal Aid has all but dissolved.

With this bias towards international companies, there has been plenty of resentment in the industry. Certain departments are being neglected, in favour of commercial law, and those without the money to afford lawyers are being priced out of justice, unless it has involved criminal activity.

This legal boom is hoped to benefit the whole of the UK, not just London city. It provides 340,000 jobs. Regional commercial / business law firms are trying to get their hand in (they raise £2bn for the economy) and compete with city lawyers for international cases. It’s thought that the UK could potentially increase its revenue from international parties in the future, if more companies decide to follow suit.

The legal sector is hoping to draw on law specialities from around the country, from Scotland to Wales, to meet the legal demand in London. To maintain British credibility, we will have to take advantage of all of our strengths.

UK embassies plan to further promote UK law abroad. We, in general, cost around 15% less than the rest of Europe and are respected for our legal judgements. We’re also known for resolving cases relatively quickly – it should take months, rather than years, to come to a settlement. It’s being referred to as the ‘great British success story’ – something to champion during a recession. Coming to the UK to resolve your commercial disputes is just good business sense for many companies around the world.