The great hype surrounding the advent of a shale gas bonanza in California may turn out to be just that: hype. The U.S. Energy Information Administration (EIA) – the statistical arm of the Department of Energy – has downgraded its estimate of the total amount of recoverable oil in the Monterey Shale by a whopping 96 percent. Its previous estimate pegged the recoverable resource in California's shale formation at 13.7 billion barrels but it now only thinks that there are 600 million barrels available.

The estimate is expected to be made public in June.

The sharply downgraded numbers come amid a heated debate in California over whether or not the state should permit oil and gas companies to use hydraulic fracturing ("fracking") – the process in which a combination of water, chemicals and sand are injected underground at high pressure in order to break apart shale rock and access trapped natural gas.

Fracking involves enormous quantities of water; an average of 127,127 gallons of water were required to frack a single California well in 2013, according to the Western States Petroleum Association. That's equivalent to 87 percent of the water a family of four uses in an entire year.

California is home to an enormous agricultural industry, and with the Monterey Shale located beneath the fertile Central Valley, fracking is going to compete with agriculture, ranching and other commercial and residential users for water use. With 100 percent of California now in a state of "severe" drought, critics of fracking have gained traction in the debate over the extent to which the government should allow oil and gas companies to move in.

On March 20, Santa Cruz became the first county in California to ban fracking, the biggest win by environmental activists thus far in their campaign to rid the state of the practice. The move may have been symbolic though, since there isn't much of a presence by the industry in that locality; it was more aimed at putting pressure on Governor Jerry Brown to stop fracking in the water-starved state. That follows a unanimous February vote by the city of Los Angeles to ban the practice, the largest city to do so in the country.

Indeed, activists are pushing for a statewide ban on fracking, and a bill to do just that is working its way through the state senate. It passed a committee vote in April, but faces an uncertain future. Brown supports fracking and has trumpeted its potential for state revenues. The state has projected that fracking could bring up to 2.8 million new jobs and boost state coffers by $24.6 billion each year. He signed a bill last year that tightened regulations on the industry but also set up a permitting regime that could allow the industry to move forward. 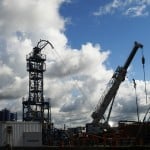 Although the topic has been highly controversial, the ramifications may not be as significant as previously believed, now that the federal government believes only a small fraction of the Monterey Shale's reserves are accessible. The main reason for the downgrade was that the original 2011 estimate mistakenly assumed that California's shale oil and gas could be recovered with as much ease as it is elsewhere in the country.

But the geology of the Monterey Shale is much more complex than in the Marcellus, Bakken, or Eagle Ford Shales – the three formations principally responsible for the surge in oil and gas production in the United States. The layers of shale in the Monterey are folded in such a way that drilling is difficult, and test wells thus far have come up disappointing.

The Los Angeles Times quoted a downbeat assessment from an official with the EIA. "From the information we've been able to gather, we've not seen evidence that oil extraction in this area is very productive using techniques like fracking," said John Staub, a petroleum analyst with the EIA. "Our oil production estimates, combined with a dearth of knowledge about geological differences among the oil fields, led to erroneous predictions and estimates," he added.

The oil and gas industry was quick to point out that the calculation could change once again if drillers could improve technology to access the Monterey. After all, no one saw the shale revolution coming only a few short years ago. But as Staub, the EIA analyst noted, for now oil and gas production in "the Monterey formation is stagnant." And it could remain that way.

By Nicholas Cunningham of Oilprice.com

How to Profit from Fed's Easy Money Mistake

More PAYE tax give and take