You would normally expect to hear of Colombian warlords fighting over drugs, but it seems they have now switched their attention to gold and I'm talking about the metal here, not 'Colombian Gold' weed.

The continual rise on the price of gold over the last ten years has drawn unwelcome interest from armed factions involved in the current decades long asymmetric low-intensity armed conflict that is going on in the country according to a New York Times report.

Drug production and running have long been the financial bedrock of the insurgents, but now the Colombian authorities have to contend with armed rebels trying to take advantage as miners from across the country flock to sites around Medellin.

Gold production in Colombia had already increased 30% in 2010 as both individuals and companies came to the area looking to make their fortunes.

Jeremy McDermott, a director of InSight* and based in Medellin, said 'These groups are metamorphosing to take advantage of the opportunities they see. They know there's a huge new revenue stream within their grasp, and they're grabbing it.'

Although some guerillas have been 'involved' in mining and cattle ranching for a long time this has usually been for extortion and money laundering purposes. But now it looks like gold may be more of a serious target for them.

With all this comes Colombia's poor environmental record with respect to gold mining. They are the world's largest per capita mercury polluter asÂ  30,000 gold rush miners release 67 tons of the stuff into their environment every year.

As members of Revolutionary Armed Forces of Colombia (FARC), the Urabeaos and the Rastrojos vie for control of mines and drugs many people die and suffer. As routes to get drugs to the USA get closed down gold may become a real central trade for these groups. But apart from gold operations being potentially lucrative for the gangs, it also now allows them to deal in a legal commodity and there will be many takers for that gold at the right price and not many questions about the origins of the metal will be asked.

* Insight – a research organization that focuses on criminal enterprises in Latin America. 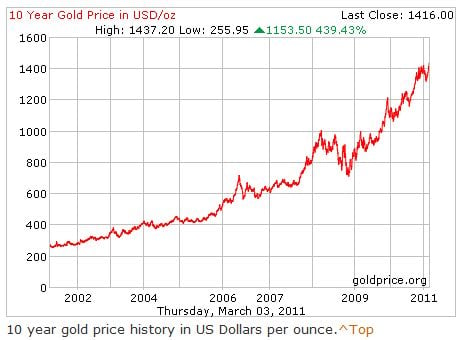 Beginners guide to saving for a big purchase