World Alzheimer's Day will resonate with many people across the globe as they struggle to cope with watching their loved ones suffer with this cruel illness.

And Alzheimer's is a curse which has blighted the family of the love of my life.

I met my wife 6 years ago in the Lake District and it was theÂ privilege to be so warmly welcomed into her family by my as then future father and mother-in-law and I was lucky enough to spend some time with my wife's father before Alzheimer's slowly started to strip him of his faculties.

Meeting the father of my wife was a moment I can only describe as terrifying because there was doubts at the back of one's mind as to whether or not he will accept me or winder whether I was going to be good enough to be his daughter.

But such was the character of Jim (my father-in-law) that upon our first introduction it was like having another father and, for some unknown reason, JimÂ immediatelyÂ loved a wretch such as myself as a son.

From the age of 21 until the age of 37 I cared for my disabled mother who had aÂ severe brain injury so when Jim's diagnosis was eventually confirmedÂ Â I had a rough idea of what was ahead for my wife and her family.

I will never forget what happened as Jim and I were getting ready for my marriage to his daughter, my wife was preparing for the wedding at a nearby hotel and I was dressing with Jim into our wedding Â suits.

He was already ill at this point with the early stages of Alzheimer's, which had previously Â robbed him of his father and decimated his brother at a very young age.

As I was dressing the emotion of the day became overpowering and I threw myself into his arms like a young child and sobbed whilst thanking him for giving me the most wonderful gift in the world, his daughter.

Jim said "I will tell you something that my father always used to tell me Richard", Jim like his father was a preacher and as a Christian I was expecting one of his amazingly appropriate quotes from the Bible and he did just that, he asked "have you ever noticed that in the Bible it always says 'And it came to pass?"

"When you are weak and vulnerable remember that it will pass", he held me as his son and I sobbed and the words gave comfort that steadied me for the day.

It was the best day of my life and weÂ tearfullyÂ watch on our wedding video Jim proudly say "I do" with conviction when asked at the alter "whom gives away this woman" by the vicar.

Upon each visit, Jim would be a little more distant but always loving and supportive and even now that he is entering the final stages of his life there is still the occasional sparkle in his eye and loving touch to his wife who has undergone unimaginable heartache.

But we know one day that sparkle will be gone.

My wife is very close to her father and when she says I love you to him it breaks my heart hearing him trying to form the words to reply but his loving communication is undeniable.

Of late Jim has had moments of panic and it is unbearable to watch him go through such anguish.

I did not expect him to remember me at this stage of his illness because I am not part of his long term memory, but he comes over to me and I hold him like a frightened child as he cries the mostÂ pitifulÂ tears and say "It came to pass".

It is these moments of love thatÂ conquer the Alzheimer's and reaches into the place where Jim is and gives him a brief sense of release and it is the love from his wife that sustains him as she watches her once strong and handsome husband fade a little more everyday.

It is love and her faith that just about keeps her going and I would say to anyone who knows of someone who is caring for a family member with Alzheimer's to be that extra bit patient with them because, what they are going through is not easily dealt with and can cause theÂ occasionalÂ rift through things said in the heat of the moment but never meant. 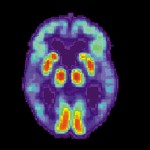 As I said previously I have first hand experience of caring for someone who has been affected by a condition affecting the brain and there are times when you can lose your temper and say or do irrational things as you kick against the world in a Â desperate cry for help.

In other words get used to saying sorry to family members but don't beat yourself up over any lashings out because they will (hopefully) understand, but if they don't it isn't anything worth losing sleep over.

ApparentlyÂ there is a test to see if my wife has the gene, but we have decided not have it done because we just want to live day to day and not in fear of this terribleÂ affliction.

We feel tomorrow's worries are left for tomorrow but other's will disagree and say it is time to prepare, but we have made the decision we have made and eveyone is different in how they cope withÂ theÂ spectre of Alzheimer's.

We are all passing through this world and that journey is not always an easy one, so if you know someone who is doing their best to care for loved one with Alzheimer's please try on this day to lighten their load a little, you don't know how much that loving gesture will mean to them.

What does the Bank of England's 'Super Thursday' mean for investors?