Following the stylishly and slightly apocalyptic posters for The Dark Knight (2008) and also some of the imposing cityscape images used for the marketing of Inception (2010), the rather cryptic image displays a skyline of Gotham City virtually crumbling under pressure.

But look carefully and you may notice that the exposed skyline outlines the shape of the Cape Crusader’s symbol. Obviously a metaphor for the film’s plot with the good people of Gotham at the mercy of continued crime, corruption and possibly a return of the League of Shadows.

But does this image also indicate a city facing a crisis without the protection of Batman?

Maybe, given the previous film’s concluding scene with the crime fighter becoming once again the hunted outsider. 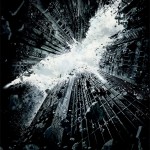 Rumour has it that the first teaser will run prior to the screenings of Harry Potter this Friday, if so, expect the web to virtually melt down this weekend.

One of the most anticipated movies ever filmed, The Dark Knight Rises will feature the return of Christian Bale in the pivotal role of crime fighter and tycoon Bruce Wayne and his alter ego Batman whilst Michael Caine, Morgan Freeman and Gary Oldham also return for a third time in their respective roles.

Tom Hardy, Joseph Gordon-Levitt, Marion Cotillard will also prominently feature in an increasingly expanding cast with Anne Hathaway in the role of a certain feline thief and anti-heroine.

The Dark Knight Rises is released in July 2012.

Cheryl Cole back in the Studio

George Osborne's brother was in a relationship with a call girl