Although the figures are largely what the government (and others) expected, the latest ONS figures on the public sector finances show just how hard it is to change the course of this huge ship of debt.

In December the budget deficit (excluding the temporary effects of financial interventions) was Â£10.8 billion, which is nicely down on last December’s Â£13.3 billion.

The following graph of the monthly current budget shows the pattern over the last couple of years, following a spiky but identifiable pattern. But the trend line shows that there is gentle downwards progression further into negative territory. Overall the deficit has been getting larger despite attempts to cut public sector spending.

Then there is the consideration that this gently increasing deficit is still adding to the overall pile of debt that the public purse is supporting.

And while GDP is under strain and growth is hard to come by it makes the debt to GDP percentage change look alarming compared to previous years, the graph below shows from 2003 onwards. 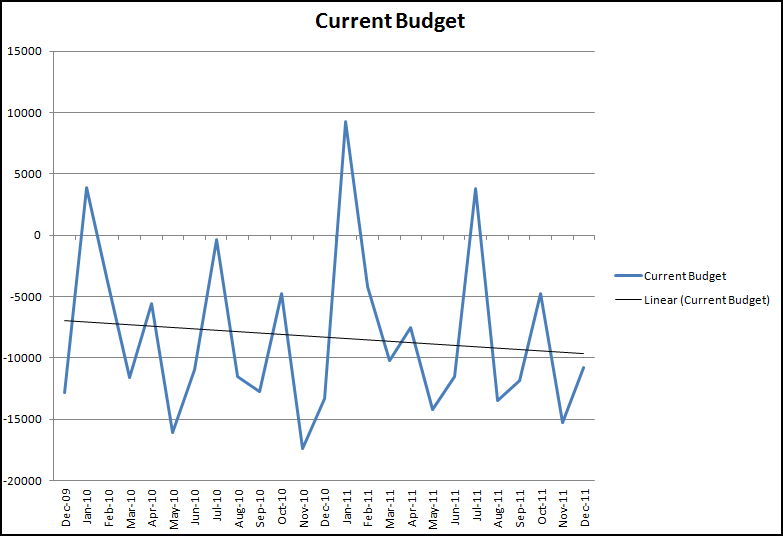 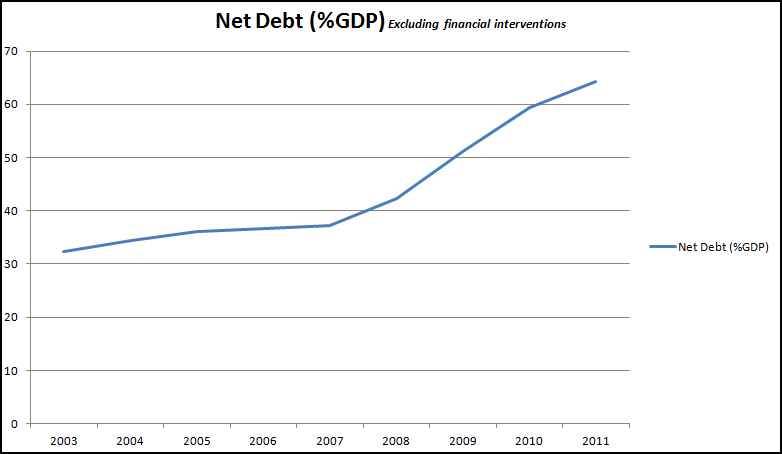 According to ONS figures we now owe over Â£1 trillion (Â£1,003.9 billion to be exact) in net debt before the temporary effects of financial interventions.

But when we take financial interventions into account we owe Â£2.33 trillion at a ratio of 149.1% to GDP.

So, while we may welcome the tactical victory of a reduction year on year of the deficit, it is only a reduction in the rate at which we are accumulating the debt. The debt black hole gets bigger and so do the interest payments that go with it.

Nida Ali, economic adviser to the Ernst & Young ITEM Club does though think that this is encouraging news. “Yet another encouraging month for the Chancellor with borrowing in December over Â£2bn lower than the same period a year earlier. The government has made good progress in consolidating the public finances so far and, despite some upward revisions to borrowing in previous months, there’s still a good chance that borrowing will undershoot the OBR's full-year forecast of Â£127bn.

“With a 7.3% year-on-year increase in the central government's tax revenues and second consecutive decline in spending, the release revealed encouraging trends. While the higher VAT rate accounts for part of the rise in tax receipts, it is very surprising that the government, despite an unsupportive economic environment, has managed to contain spending to this degree.

“The January figures will be crucial in assessing whether the full year target will be met. The year-on-year figures will no longer be flattered by the change in the VAT rate, while we will also be able to see the degree to which the 2011 slowdown hit corporation tax receipts.

“The longer-term outlook remains very uncertain and the recent strong trends will be increasingly difficult to sustain. With the Eurozone crisis showing no signs of abating, it’s possible that the OBR's growth forecasts will prove to be too optimistic, despite significant downgrades in November. This will have adverse implications for the public finances and the Chancellor could have some more difficult decisions to take when he presents his Budget in two months time.”