The Demise of the Middle Class

Of course, anyone who knows me, will already know the answer to that. I often include this in tweets: #BanQE.

It is proven beyond doubt (except for the liars – the politicians, the bankers, the central bankers, the media, the multi nationals – who pretend it has worked) that it has enriched the rich and the financial elite and it has impoverished the bulk of folk.

Also, if you are an employee your employer has probably been under the cosh and your income has been curtailed. Yet, your currency has probably depleted. So, your cost of living has risen. The cost of housing has risen.

You are toast, while the rich are laughing their heads off. 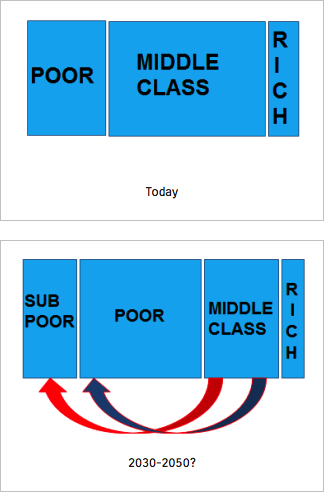 So, some of you will think I’m just polemicising here. OK. Don’t listen to me. Read and listen to the guy who ran the FED’s QE operation. 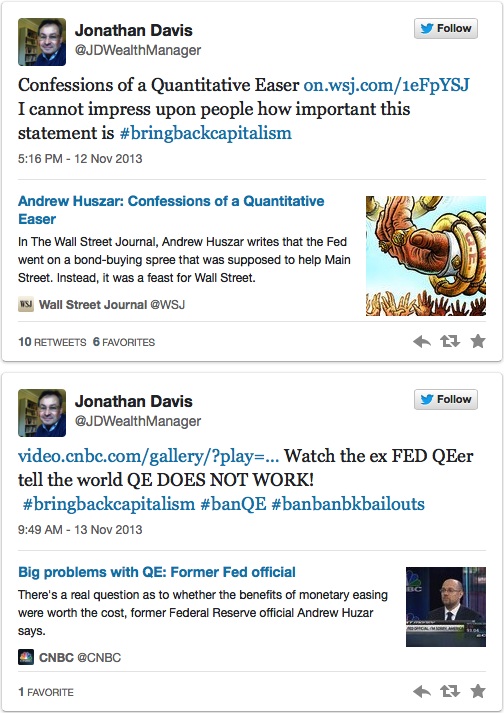 Yet, if you talk to 90% of the population they probably don’t even know what QE is never mind what it’s doing to them.

As for the rectangles above – this is our view of what is developing over about a generation. The Middle Class is being decimated, death of a 1000 cuts. By 20-30 years expect the MC to be no more than a half in size. The majority of the leavers will become Poor. The rest will become SubPoor – no income and no assets. Think about that for a moment. Picture an old babooshka selling pencils at the end of her garden.

With such meagre economic growth, for decades, you will find that more and more of your income will be used just for living day to day. You will have less and less spare money for anything other than bare necessities. Eventually, the politicians will take more and more of your income and assets by taxing them. The bankers will take your assets too. I read last week that companies are lending on cars. Any cars. The interest rate is so punitive that you will miss at least one payment. There will be no delay nor come back. They will take your car. Not really much difference with a mortgage. Not really, if you think about it. Just a longer process.

I was on with the wonderful Kaye Adams @CallKaye of BBC Radio Scotland this morning. Did you know there is a growing problem of people borrowing for Christmas? They then struggle to pay it back over the next year. Many never pay it back. They stay in debt for ever – due to Christmas. You Couldn’t Make It Up.

Removals firm reply to the PM