A strangely late coming of age experience born out of a family tragedy awaits Hawaiian lawyer and property developer Matt King (Clooney), the preoccupied administrator of an unspoilt stretch of coastal landscape that has been the possession of the King dynasty for generations is about to find his world turned upside down following a boating accident and subsequent injury sustained by his wife.

Laying in a coma and slipping further towards death, King not only learns of her infidelity with another man but also faces the prospect of reconnecting with his two daughters (Woodley and Miller) and mending their dysfunctional relationship.

Alexander Payne returns to the director’s chair eight years after his last feature, Sideways (2004), proved both a commercial and artistic hit.

Like its esteemed predecessor, The Descendants (2012) is another world wry, subtle and sometimes comedic tale that is firmly anchored by a standout performance from Clooney as the fifty something man forced to redefine his life following the revelations and disasters taking place within the King family.

Payne instantly dispels any notion of Hawaiian blue skies and a pacific paradise with his strangely late coming of age story set against an island backdrop constantly experiencing an incoming weather front of grey cloud and murky drizzle that appropriately echoes the changing fortunes and troubled thoughts of his central protagonist.

The director also has found his perfect lead in Clooney, an actor who has previously mastered the role of a man forced to redefine his purpose in life with superior performances in the thriller Michael Clayton (2007) and more recently in the comedy drama Up in the Air (2009).

The Descendants throws a new spin on this theme courtesy of King’s close yet emotionally distant relationship with his two daughters, portrayed by Woodley and Miller respectively.

Both shine in their own right with Miller and her portrayal of the waywardly advanced younger daughter, complete with her knowledge of the adult world, providing the occasional laugh whilst emphasising how far King has become estranged from his children.

The reaction by the father to the spontaneous outpourings of his younger child allows Clooney to showcase a bewildering range of cleverly twisted facial expressions that are sometimes reminiscent of the actor’s work with the Coen Brothers.

Complimenting this dysfunctional trio is the arrival of Karuse in the role of Sid, a seemingly deadbeat type character and friend to the older daughter portrayed by Woodley.

Any initial preconceptions held by King or the audience of Sid and his slacker mannerisms, inclusive of his offbeat humour, are turned on their head in a subtle and touching scene with King discovering that his recent bad luck is not so dissimilar to that experienced by his daughter’s friend.

Payne ensures that the humour is subtly dark throughout and born out of circumstance whilst King’s inherited moral deliemma concerning the sale of acres of unspoilt Hawaiian countryside to the commercial needs of modern day tourism dovetails nicely to the family crisis inherited by the lawyer and his daughters closer to home. 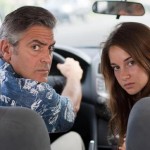 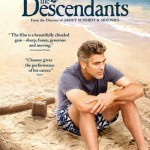 Beau Bridges is also to be found on fine form and clearly having fun in the role of ageing relative and slacker, Cousin Hugh, one of several members of the King dynasty deciding that the financial value of the family legacy clearly outweighs any obligation to the environment or traditional sentiment.

Matthew Lillard is suitably slippery as the married adulterer whom King initially stalks out only to reach the conclusion that the rival stranger should rightfully learn of his wife’s demise whilst Judy Greer turns in an unexpected and scene stealing performance during the closing moments as the other injured party.

Perhaps Payne’s underlining theme, if there is one, is that you make the best out of Â the hand dealt to you, however unfortunate, with Clooney and Co. certainly pulling together to make for a subtle, funny and sometimes emotionally driven redemption tale.

The Descendants is a superior comedy drama following the gradual bonding of a dysfunctional family unit that floats safely ashore thanks to a memorising performance from Clooney and the deftly handled direction skills of Payne.