This September sees over 10 million children going back to school, with many feeling anxious about being bullied. A new survey of over 2,000 adults and 500 young people about their experiences of bullying in school, conducted by YouGov for charity, The Diana Award, reveals that nearly half of GB adults have experienced bullying and (this rises to 57% of adults 18-24yrs) and well over half (64%) of young people say at least one of their friends has been bullied at school with a quarter saying their friends are worried about returning to school due to bullying. The results also show the strong support for trained Anti-Bullying Ambassadors in schools from both adults and young people. Something that many of the celebrities felt was missing in their own school. 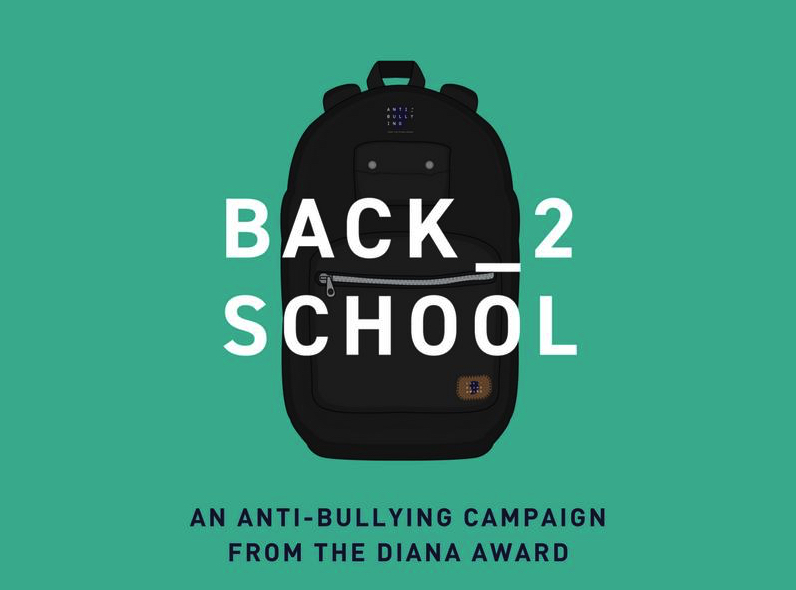 The Diana Award runs the leading Anti-Bullying Campaign in the UK and Ireland giving young people, professionals and parents the skills, confidence and training to tackle all forms of bullying as Anti-Bullying Ambassadors.

To mark the start of the school year a host of celebrities are reliving their experiences of being bullied at school for The Diana Award’s #Back2School campaign. Prompted by a photo of them in their school uniform, their experience is captured on film in a classroom setting- last year’s videos can be seen here – http://back2school.antibullyingpro.com/ this year’s videos available on request.

To kick-off the month’s #Back2School campaign, The Diana Award Anti-Bullying Campaign is encouraging everyone to get involved across social media channels by posting/sharing a picture of them back at school with their advice and if they choose to, text a donation to support the training of young Anti-Bullying Ambassadors in every school.

As well as reliving their personal experiences of being bullied, celebrities will give their advice and raise awareness of the need for Anti-Bullying Ambassadors in every school. The Diana Award is also providing #Back2School advice and support online and through their social media channels.

“When I came back from Beijing, that’s when everything changed. They took the mick out of what I was wearing on the diving board, they would throw stuff at me at lunchtime, it became a thing that diving was becoming a burden.” Tom Daley.

“Boys at the drama school would call me names, tell lies about me, push me and kick me… A horrible video was made of me which went around different schools” Reuben De Maid.

“I was a bit of a tomboy at school. One of the girls in my school started calling me a lesbian. At first, I didn’t realise I was being bullied until I told my parents.” Holly Branson.

“I was feeling isolated, feeling alone, had a lot of anxiety.  I was physically harmed in secondary school. I was cornered, beaten, had footballs thrown at me. I was stabbed by pens in my classroom… A lot of kids picked on me because I was a lot larger so I had food thrown at me.” Haarnam De Kaur.

“People wouldn’t sit next to me, they wouldn’t have lunch with me. People didn’t want to walk home with me. It was like being completely ostracised because I was the queer one.” Paris Lees.

“Some of the things that happened to me would definitely be described now as sexual harassment… If you were a girl and wore a white t-shirt, the girls would get a fire hose and spray you down so they could see your underwear.” Cathy Newman.

“I got racist abuse growing up…. It got me upset, I was angry… I’ve got young kids now- 9, 7 and 5- I don’t want to see them being bullied, but I also stress to them I don’t want to see you bullying anyone… I would of made a great Anti-Bullying Ambassador” Rio Ferdinand.

“I would be punched in the stomach whenever I was seen in the corridors, and told that I would to be 'cut up and hidden under the floorboards”.  James McVey, The Vamps.

‘Bullying made me quit gymnastics, people at school called me ‘gay’ and laughed about me wearing a leotard…. I had done it for a long time and even competed at a high level. I was pretty good at it and who knows where I could have gone with it. I didn’t tell anyone. Looking back, I wish I did.  If you enjoy doing something, and you’re good at it, you shouldn’t stop it for any reason other than yourself making that decision. Someone else made that decision for me. Only stop if you actually do want to stop’.  Marcus Butler.

“Young people spend 11,000 hours of their lives in full education.  School should be safe and free from bullying.  We’re urging everyone to get behind our campaign by helping us to train Anti-Bullying Ambassadors in schools. We know this peer to peer campaign works and these young ambassadors are already changing behaviours and shaping attitudes by sending a clear message that bullying isn’t acceptable. Our vision with the help of the public/nation is to reach every one of the 27,000 schools across the UK”.

Celebrities supporting the campaign include: