The Eagle – A film review

Writers: Jeremy Brock (based on the novel by Rosemary Sutcliff).

A generation after the ninth legion of the Roman Army vanishes in the northern territories beyond Hadrian’s Wall, Centurion Marcus Aquilla (Tatum) is assigned to a garrison fort in Britain.

Subsequently discharged from the army as the result of a battle injury, Marcus spares the life of the native Esca (Bell) in the gladiatorial arena.

Marcus’ true motives for coming to the province are revealed as he heads north to search and reclaim the lost standard of the ninth, a golden eagle.

Sutcliff’s fictional novel based around the ninth legion was first published in 1954 and aimed at a young adult audience whilst academics have since questioned whether the defeat actually took place.

In casting Tatum and Bell the indication is that The Eagle is aiming to recapture a teenage audience in addition to adults with Brock/ Macdonald seemingly having the difficult task of adapting the source material whilst retaining a 12A rating.

Early indications suggest The Eagle remains close to it’s current contemporaries with a gritty opening battle scene (inclusive of a decapitation), but as the film progresses it becomes apparent that the slick camera work used to capture the action is also employed to edit and tone down the violence (scenes of execution are cut and silenced prior to blade meeting flesh).

Mcdonald (The Last King of Scotland – 2006) seems much more at home with capturing the beauty and wildness of the north and there are only glimpses of the Romanised culture of second century Britan (the Janus mask worn in the arena scene is a nice touch and throwback to Gladiator – 2000).

An added welcome is the lack of CGI with the exception of an animated Hadrian’s Wall perhaps providing the film’s highlight.

Elsewhere there is an uneasy clash of accents with full marks awarded for the use of Gaelic in the scenes north of border, but the cod American dialects stick out and some members of the Roman elite sound as if they learnt their trade in RADA rather than the Italian peninsula.

Both actors attempt their best with a script that seems to lack any subplot or justify a running time of 1hr 52mins. The third act essentially reverts to a chase scene with natives resembling American Sioux rather than Picts or Scots (this could easily be The Last of the Mohicans – 1992) and in a story that virtually eschews any female interaction there’s also an uneasy air of bromance about proceedings.

Tatum seems subdued and sullen throughout and the actor is never really given much to work with in terms of memorable dialogue or character development. As the focus point of the film we need more from the role as the hero’s journey and development should act as a driving force (as witnessed by Russell Crowe’s genre defining performance in Gladiator). 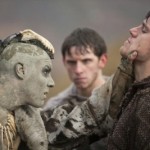 Even a characteristic cameo from Donald Sutherland as Marcus’ uncle cannot help the feeling that proceedings feel rather flat at times.

Jamie Bell provides the exception. His enslaved native is layered with emotions and isÂ  Â by far the most interesting aspect of the film. As Esca guides Marcus through the north he adds a touch of suspense and mystery to the character and his motives.

But ultimately not even Bell can prevent the feeling that The Eagle is at best a very mixed affair.

With a lack of memorable dialogue and a one dimensional lead, The Eagle never manages to fulfil it’s potential with moments of interest provided solely by the grandeur of Hadrian’s Wall and Bell’s enslaved native.

James Cameron's Avatar is a masterpiece