Time will tell whether the European Central Bank’s (ECB) €1.1 trillion quantitative easing (QE) package will have the desired impact on the real economy.

Beating deflation is the paramount objective – how many times does the ECB have to reiterate its explicit mandate of maintaining price stability? Raising inflation expectations is to be achieved by incentivising the banks to lend to corporates and households, using a three-pronged strategy.

First, the interest rate reduction on the TLTRO (targeted long term refinancing operations) programme – a zero-cost 4-year financing facility for banks – should allow banks to raise cash available for lending to the private sector. Second, since the negative deposit rate went into effect in July 2014, there is cost to parking cash (potentially raised through TLTRO) in the ECB’s deposit facility, which provides more incentive to lend to the private sector. Third, banks can sell bonds on their balance sheets (including via the TLTRO programme) back to willing buyers at the ECB or national central banks. In effect, banks can sell their existing sovereign bonds (such as periphery eurozone bonds) on their trading books to the ECB for a profit. With this extra liquidity, those profits could then be used to expand the banks’ loan books. There is no maturity limit – the whole curve is included from 2- to 30-year maturities – and the purchases can include supra-nationals, asset-backed securities and covered bonds.

The transmission of policy will be the key to whether QE succeeds. There is no guarantee that German banks, where German sovereign bonds comprise the largest share of the QE programme (around 25%) based on the national central banks’ share in the ECB’s capital key, will lend to the credit-starved countries in the periphery eurozone. Nonetheless, the sheer size of this programme emboldens Draghi and his fellow ECB policymakers to believe the huge addition of liquidity will be “fungible” across the eurozone. QE sees no borders. 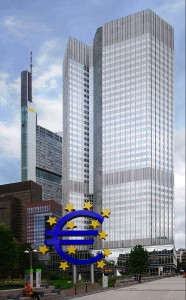 The ECB has played its part for now and bolstered its credibility to satisfy investors. It has moved in the face of political opposition (in short, the Bundesbank) and has provided a strong message to markets. That should boost confidence in the short term across risk asset markets. There remain lots of ifs and buts around risk sharing and the split between public and private bond purchases (‘guestimated’ at 75/25 but not yet confirmed). Unlike when the Federal Reserve embarked on its QE programme, the ECB’s communication has been opaque and short on detail.

In solving the eurozone’s structural economic fragilities, President Draghi is clear in that the ECB cannot act alone; nor can the ECB’s move become part of a central-bank-easing/currency devaluation war against many economies fighting similar disinflationary forces. More needs to be done over the medium term, and the ball has been placed firmly in the court of the eurozone governments. Draghi has no Plan B. He has called for growth-friendly fiscal consolidation coupled with structural reforms. Governments should be under no illusion that the ECB means business; in Draghi’s, words “speed is of the essence” to avoid a Japan-style lost decade.

The ECB expresses confidence that its QE programme will raise longer term inflation expectations, which stand at historical lows. In theory, this unprecedented massive injection of liquidity appears to be the right formula, but we await its application to discover whether it will be Q.E.D.