The economic impact of the Olympics

With the Olympic Games looming this summer, various analysts have been busy trying to work out if the Games will provide much of a fillip to growth, or drag the UK out of recession. A recent report from Moody’s suggests any impact will be small, while the CEBR thinks that GDP could even fall during the Games, as Olympic tourists crowd out other visitors.

The most likely outcome is that the Games have little real impact on GDP. Due to the way the ONS measures activity, all of the tickets that were bought last year will show up in consumption in the third quarter’s data. But past experience – notably in Athens and Sydney – suggests that any boost to consumption is at least partly offset elsewhere, so that overall GDP is little changed. There is little reason to think things will be different this time around (although the extra June bank holiday will cloud the picture a bit).

For starters, London was already a prime tourist destination. The CEBR may have over egged it a bit, but even without the Olympics thousands of people would still have visited London this summer. The extra tourism impact for London, in proportional terms, won’t be as big as if the Games were in Hull. More importantly, according to the World Travel and Tourism Council (WTTC), around two-thirds of the economic contribution from tourism to the UK comes from UK residents. We like visiting our own landmarks. But for most people a trip to the Olympics could well reflect displacement spending – we may go to watch the Beach Volleyball, but we’ll scrap a couple of restaurant meals to pay for it. It's not like people have extra cash to spend. On this basis, there are good reasons to think that the overall impact will probably be small (or would be, but for ONS accounting).

What about overseas visitors? Foreign tourists are expected to provide more of a boost to the UK this year, but only an extra Â£1bn compared with 2011, according to the WTTC. To put that in context, that’s 0.07% of annual GDP. Furthermore, any positive export benefit from these extra visitors (which may or may not reflect the Olympics – it could simply reflect Asia getting richer and travelling more) may well be offset by UK residents running away on longer holidays to escape, or the general business disruption that is likely to ensue when transport systems fail to cope. A few days of snow in December 2010 knocked around 0.5% off GDP – so how much impact would there be from the effective collapse of London Bridge railway station (and the Jubilee Line, and DLR) for two weeks? 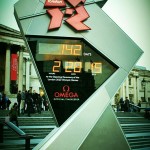 This is not to say that the Olympics have no benefit at all. I visited the site a couple of months ago and was deeply impressed by the transformation that has taken place. (Being an odd sort, I also found the juxtaposition of Westfield and the old Stratford shopping centre simply delicious.) Hundreds of workers will have learnt skills and benefitted, and some construction firms will have done well (although most of the benefit has clearly passed, given current conditions). The Games will probably also be a lot of fun, especially if I can convince my boss to let me work from home.

But, fundamentally, we need to put these things in context. The UK is a 1.5 trillion pound economy, with a workforce of almost 32 million people. If you want to have a significant macroeconomic impact – that is, meaningfully shift one of those two numbers – you have to be going some. The Olympics will be fun. But not especially significant, in macro terms.

Image by Chitrapa (Own work) [CC-BY-SA-3.0 (http://creativecommons.org/licenses/by-sa/3.0)], via Wikimedia Commons

The budget and pensions