The economics of deflation

In a speech at Imperial College Business School, Deputy Governor Ben Broadbent explores the economics of deflation. He explains what the theoretical risks are, how the MPC could respond were risks to materialise and why, while the MPC must be ‘watchful’, the chances of sustained deflation are ‘low’.

This week the ONS announced that CPI had fallen to 0%, ‘the first time the UK has failed to record positive annual inflation for over 50 years.’ Some have claimed that ‘deflation is a problem “because it encourages people to postpone consumption”. … and this can lead to a vicious circle in which prices are then depressed further.’ This is ‘at best a partial description of the problem, at worst a bit misleading. It leaves out two important considerations.’

First, any incentive to delay purchases is offset by an increased propensity to consume when, as now, nominal incomes are rising. Secondly, the incentive to save applies whenever nominal interest rates are higher than inflation and doesn’t ‘suddenly appear when expected inflation dips below zero’. Likewise, debt deflation is driven by nominal incomes falling much faster than nominal interest rates and would not occur when incomes are growing. What we have seen in the past few months is, instead, ‘what some have termed “good” deflation’; an improvement in the terms of trade which has led to an increase in nominal income growth. 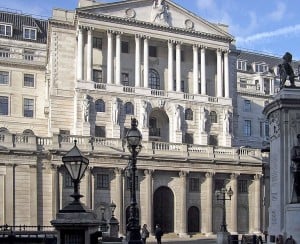 In theory, even where periods of mild deflation, like that seen in Britain in the second half of the 19th century and up to the First World War, do lead to falls in nominal wages, ‘there doesn’t look to be anything particularly bad about negative inflation’ – so long as the appropriate level of the real interest rate is sufficiently high not to have to contend with the zero lower bound. When that is the case, interest rates can compensate for widespread price falls.

‘Clearly, we are not in the same position today’ and given the cuts in interest rates made necessary by the financial crisis ‘there is now less room to deal with any entrenched and protracted deflation, in prices and wages alike’ should that occur. ‘The evidence suggests that unconventional policy is effective: even if they don’t circumvent it entirely, asset purchases help soften the constraint of the zero lower bound. Second, with the financial system gradually improving my guess is that the neutral real rate of interest is more likely to rise than fall over the next couple of years.’

Nonetheless the constraints of the effective lower bound means the MPC must be ‘watchful’ for signs that ‘falling prices will beget yet weaker or even negative wage growth – that today’s “good” deflation will metastasise into something a good deal worse’.

‘What are the chances of such a thing?’ There is evidence that price falls have ‘already fed through to spending and household confidence’ and that the propensity to consume has dominated the propensity to save. The historical experience also suggests that low inflation is very unlikely to persist. Looking at 3,300 data points from across the world, in only 70 has inflation actually fallen and ‘in the majority of those inflation was positive the following year. Of the 24 instances in which prices have fallen for more than one year, all but four – two in Japan, two in Bahrain – have occurred in developing countries with pegged exchange rates.’

The presence of a credible monetary policy framework reduces even further the risk of protracted deflation. ‘If people expect inflation generally to be on target, over the medium term, the central bank has to do less to actively ensure it’ and policy does not need to respond to ‘one-off hits to the price level.’

Ben concludes that over the next couple of years ‘headline inflation will get a sizeable kick upwards, once the falls in food and energy prices drop out of the annual comparison. In the meantime, the UK labour market continues to tighten – low inflation won’t be the only influence on pay growth this year – and the boost imparted by lower commodity prices to real incomes is already apparent in higher consumer spending, here and in other countries too.'

RICS claim homeowners selling in a ‘dash for cash’

Heavy handed tax legislation is a blow to small business