The Economist, a leading source of analysis on international business and world affairs, today launched its latest #feedingthefuture campaign in London neighbourhoods, followed by Manchester and Birmingham on select days from 26th April through 18th May. 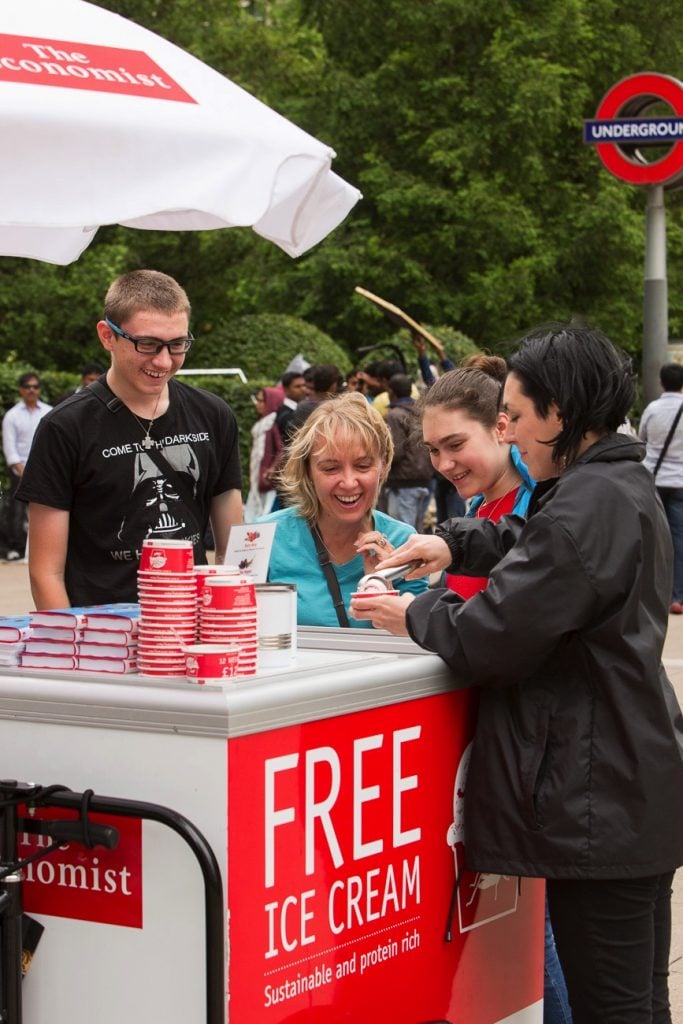 Londoners in Denmark Hill, Kingston, Boxpark, Chiswick High Road, Sloane Square, Clapham High Street, Canary Wharf and Bloomsbury will be offered a free coffee (“biodiesel coffee”) and will learn how used coffee grounds can create advanced biodiesel, a sustainable new fuel that can help the world reduce its dependency on crude-oil deprived fuels. This is based on an Economist article that explained how coffee biodiesel is comparable to the best biodiesels on the market and doesn’t use up valuable resources like plants or land.

At Paddington Station, Euston Station, Charing Cross, London Fields, Liverpool Station, Holborn, Waterloo Station, Victoria Canary Wharf and King’s Cross, Londoners will be offered free smoothies (“ugly food smoothies”) that were made from “ugly” food, originally rejected by supermarkets because it was discoloured or misshapen, but is still edible.

In Manchester, Birmingham and certain London neighbourhoods including Brick Lane and Spitalfields, local residents and workers will be offered free ice cream topped with edible insects (“insect ice cream”). The concept is based on an Economist story “why eating insects makes sense,” which explores the idea of using insects to feed the ever growing global population, projected to reach 11 billion by the end of the century.

Consumers who participate in the program will have the opportunity to subscribe to The Economist at an introductory rate of 12 week for £12 and as a special gift can opt to have The Economist plant a tree on their behalf.

Below is the schedule of activities by location for the #feedingtheuture campaign.  Activity starts between 7 and 9am and lasts for 8 hours on the day.  Locations are subject to change and more dates will be announced as they become available.

About The Economist (www.economist.com) With a growing global circulation and a reputation for insightful analysis and perspective on every aspect of world events, The Economist is one of the most widely recognised and well-read current affairs publications. The paper covers politics, business, science and technology, and books and arts, concluding each week with the obituary. In addition to the web-only content such as blogs, debates and audio/video programmes available on the website, The Economist is available to download for reading on Android, Blackberry PlayBook, iPhone or iPad devices. The Economist Espresso, our daily briefing smartphone app, is also available for download via iTunes App Store or Google Play.

The Economist collaborated with its agency partner Sense NYC (a brand experience agency specialising in real world thinking) to develop the #feedingthefuture campaign framework and execute these provocative engagement programs designed to help grow brand awareness and audience. Sense has been The Economist’s agency of record for experiential marketing in the UK since 2015 and won The Economist’s North American business in late 2016.