The latest UK employment figures show that the numbers of people in work rose, unemployment fell and the number of economically inactive people reduced.

The June 2017 labour market data from the Office for National Statistics (ONS) shows that, from April to June, there were 32.07 million people in work, which is 125,000 more than in the January to March period and 338,000 more than the same period last year.

The number of those in ‘zero-hour contracts’ as their main employment fell to 883,000, which is 20,000 fewer than year earlier.

Unemployment fell to 1.48 million, giving an unemployment rate of 4.4 percent, down from 4.9 percent in the same period last year and the lowest rate since 1975. The number of those unemployed was 57,000 down on January to March and 157,000 fewer than the April to June last year. 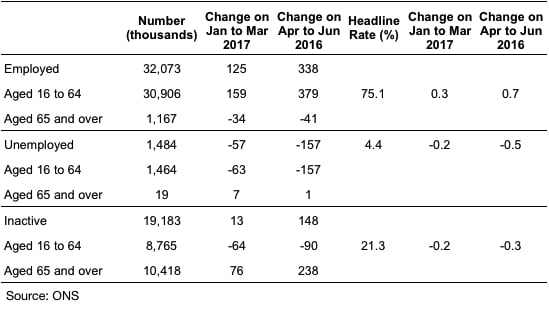 Economic inactivity fell. 8.77 people between the ages of 16 and 64 were economically inactive, down by 64,000 compared to January to March and 90,000 fewer than April to June 2016. The inactivity rate was 21.3 percent, which is down from 21.6 percent in April to June last year and the lowest since comparable records began in 1971.

Nominal average weekly earnings for employees (both with and with our bonuses) rose by 2.1 percent, but when adjusted for inflation the real terms effect on earnings was a fall of 0.5 percent.

“Labour welcomes the overall increase in employment but we are deeply concerned that millions have faced a real terms pay cut under this government. With wages continuing to fall in real terms, Tory cuts to in-work support, and rising prices, many households and families are worse off under this government.
"The Government has failed to close the employment gap faced by women, disabled people and ethnic minority groups, who are still less likely to be in work, and has failed to tackle regional inequalities in the Labour market.

“A Labour government will stand up for all working people, implementing a real Living Wage of £10 per hour and bringing an immediate end to Tory austerity.”

“Under this Conservative Government, more people in the UK are in work than ever before.

“Since 2010, over 3 million more people are in work, with the security of a regular pay packet.

“Labour’s reckless and ill-thought-out policies would put all this at risk. Only the Conservatives are building a strong economy that works for everyone.”

“Today’s report shows that the UK labour market remained strong in the second quarter despite some signs of faltering economic momentum. With wage growth showing some tentative signs of picking up and headline inflation close to its peak, the squeeze on the consumer may be starting to ease.”

“Separate figures confirm that productivity has been falling throughout 2017 – this matters as rising productivity is the only sustainable route to higher wages and better living standards.

“It’s therefore incumbent upon the Government to work with businesses to protect the UK’s flexible labour market, and design an industrial strategy that will drive productivity and wage growth.”

"Employment in the UK continues to be resilient despite the slowdown in economic growth in the first half of this year. Wage growth has also edged up – though it continues to lag behind inflation. Even so, the squeeze on real wage growth has eased slightly on the basis of this month's figures.

"The picture from this latest set of labour market data is consistent with our view that UK economic growth will be modest in 2017 and 2018 – at around 1.5pc in both years. Though unemployment is at its lowest level since the mid-1970s, it would not be surprising to see the jobless rate edging up later this year in response to the current economic slowdown."

“The UK labour market continues to show robust improvement, despite faltering economic activity. This provides some much-needed good news for consumers as they continue to face a serious squeeze on purchasing power.

“However, strongly rising employment amid slow growth is not positive for already worryingly weak UK productivity.”

“It may be that a number of UK companies are currently keen to take on workers or at least hold on to them given concerns over labour shortages in some sectors and reports of fewer EU workers coming to the UK since last June’s Brexit vote.

“However, it remains questionable as to how long UK employment can sustain this resilience. We suspect that sooner or later UK labour market resilience will be diluted by weakened UK economic activity and heightened uncertainty over the economic and political outlook, including Brexit developments.”

“Worryingly for consumers, higher employment is still not translating into higher pay as inflation hovers close to 3%. Thus the squeeze on consumers remains appreciable, with obvious negative implications for personal expenditure.

“Anaemic earnings growth is a key factor against any near-term Bank of England interest rate hike, and the latest data keeps this argument firmly in place, along with recent largely disappointing UK economic developments.

“Headline (three-month average of the annual rate) growth in weekly earnings only edged up to 2.1% in June from 1.9% in May, which had been the lowest three-month growth rate since February 2016. Admittedly, it jumped to 2.8% in June itself from 2.1% in May but this was driven by bonus payments in the financial sector.

“With inflation at 2.6% in June, the ONS reports that real average weekly earnings decreased by 0.5% including bonuses.

“Some companies are clearly keen to limit pay as they face a highly challenging domestic economy and as their input costs have been lifted markedly by the sharp overall weakening of the pound.”

“This is a direct consequence of the higher inflation we have seen since the EU referendum.

“We’re not talking about hypothetical future damage to the UK economy, but real costs experienced by real people now.

“Instead of the land of milk and honey promised by Brexiteers, we’re seeing falling wages, higher prices and rising rail fares.

“This reinforces the need to protect living standards and jobs by staying in the single market and customs union.”

“The UK Labour Market continues to show its strength and has maintained its leading position in Europe. Just as the fears of post-EU referendum economic catastrophe proved to be groundless, so the predictions of a Brexit-fuelled skills exodus seem to have come to nothing.

“And although the significant drop in the number of people employed on zero-hours contracts is clearly positive, it also means the UK economy will now rely more than ever on the flexibility provided by the self-employed. It’s very encouraging, therefore, that today’s figures also show that an additional 23,000 self-employed people entered the workforce between April and June compared to the same period last year.

“Now, as inflation starts to cool, we can reasonably expect to see our workforce growing in size, flexibility and prosperity in the months and years to come.”

Inequality in the UK: DEMOS and the One Society