Parliamentarian re-enactors are a spectacle in Central London

• Re-enactment celebrates the launch of the new TV series, 'Weekend Warriors' on Yesterday from Wednesday 7th January at 9pm

It was an early start for a group of several members of the English Civil War Society (ECWS), who transformed into Parliamentarians, also known as Roundheads to march across Millennium Bridge this morning.

They were celebrating the launch of the new TV series 'Weekend Warriors', starting on Yesterday from Wednesday 7th January at 9pm. The programme celebrates the little-known world of the battle re-enactors and the people who are dedicated to accurately portraying the world’s most famous conflicts in the fields and villages around the UK. 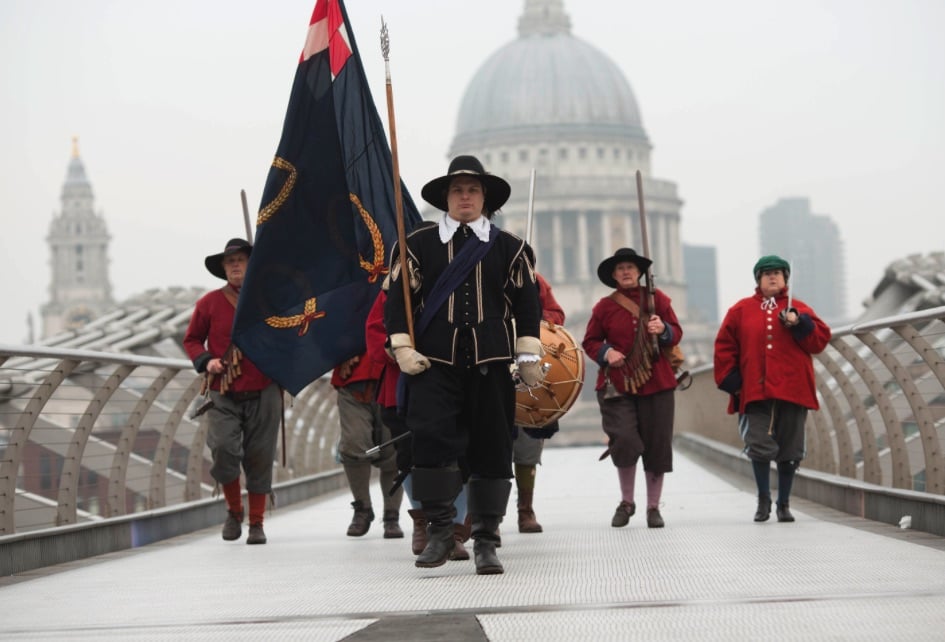 The English Civil War Society (ECWS), one of the oldest re-enactment groups in the world, is committed to bringing to life the most important battles in the conflict between King Charles I of England and his supporters, and their opponents in Parliament and Scotland.

At 8am yesterday, several members of the ECWS congregated outside Shakespeare's Globe, London. They were representing the first British Redcoats, which myth states wore red so they could scare the enemy as they would not see the blood on their uniforms. They also carried modern day reproductions of 17th Century match-lock muskets.

They are stars of the first episode of Weekend Warriors, in which they prepare to recreate the bloody Siege of Marlborough. In the battle from November 1642 the Member of Parliament Sir Neville Poole led the campaign to defend the town and confront 4,000 of the King’s cavalry led by Lord Digby, who was determined to secure this important trading town for Charles I. At the recreation last year there were over 300 soldiers on the battle-field, a dozen cavalry, and some of the world’s biggest firing cannons.

“Battle re-enactors are the ultimate living historians and these members of the English Civil War Society are committed to continually striving for historical authenticity in their clothing and artefacts. It is particularly relevant that St Paul’s Cathedral is in the background as they march across Millennium Bridge. The original building was mistreated by the Parliamentarian forces, who used the nave as a stable for cavalry horses.”

“The English Civil War Society has been active for over 30 years, seeking to recreate a violent period in British history, when the country was torn apart by a civil war in which brother fought against brother. All theclothing and weapons we are carrying with us today are modern day reproductions which we believe to be historically accurate from examining surviving pieces, records, and paintings. They are made either by our members themselves or by specialist traders.”

Weekend Warriors on Yesterday from Wednesday 7th January at 9pm